Court records show Ralph Wald, a retired U.S. Army Lieutenant Colonel, turned 77 years old Monday. That morning, Hillsborough County deputies were called to his home on Clara Drive where they found a woman's body. The M.E.'s office told FOX 13 it received the body of Johnna Flores, 48, who is Wald's wife.

Two days later, deputies had not made any arrests.

"At this time, we have classified this as a homicide," said Crystal Clark, a sheriff's office spokesperson. "We have detectives who are looking into all the evidence behind this case, working to see what charges will follow."

In 2013, Wald was charged with murder after he shot and killed 32-year-old Walter Conley, who Wald said he caught having sex with Flores in the middle of the night.

Wald claimed he thought someone was raping his wife, so he opened fire. A jury believed him and Wald walked out of jail two months later.

"All I want to do is protect my wife," Wald told reporters following his release in 2013. "I didn't know who it was. All I know is somebody was fornicating with my wife."​​​​​​​

Wald and Flores publicly vowed to stay together and resolve their issues.

"I don't think it would be honorable for me to bail on her and I'm not planning on it. I don't think I'm being naive," Wald had said.

"We're going to work through it. I wouldn't give that man up for the world," added Flores six years ago.

But court records show the couple continued having problems. In January 2019, Flores was arrested after she threw a metal picture frame at Wald.

Nearly eight months later, deputies were back at the home and Flores was dead.

"I thought they had everything under control and that it was going to happen again because we really want to live in a safe neighborhood," said James Cullins, who lives a few houses away. "It's kind of scary just knowing that there's a death right next to my house, where my family lives and stuff like that. It's just very, very concerning and I just want my family to be safe."

Deputies said they detained one person and another neighbor told FOX 13 Wald was seen being placed into a sheriff's office cruiser.

Detectives aren't saying much else for now.

"We did question someone, once deputies did arrive. At this point that person is still in the process of being questioned," Clark told FOX 13. "We are aware of the past history at this house and we are taking that into consideration as we go through this investigation."

"I hope they get down to the bottom of it because if somebody did end up killing her, I don't want them to get away scot-free because that's not justice," Cullins said.

FOX 13 knocked on Wald's door, but no one answered. The attorney who handled Ward's case in 2013 is no longer representing him and it's unclear if he has a new lawyer. 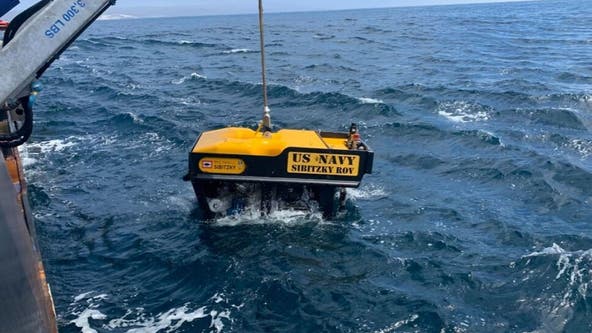