LAKELAND, Fla. - A Polk County 7-year-old is being lifted up by his community after he tried to chase down the thief who stole his brand new electric scooter right out of his driveway.

The whole thing was caught on camera. While deputies search for the thief, he's getting a lot of love and support.

In the North Lakeland community of Remington Oaks, "Everybody watches out for everybody," according to Todd Cannon.

"They've got six kids in that house," Cannon said, pointing at homes. "There's two in that one, two in this one."

So, when something bad happens to one of them, especially a child, it's a crime against them all.

Around 6 p.m. Sunday, a 7-year-old boy was outside playing. His brand new electric scooter was near the road. 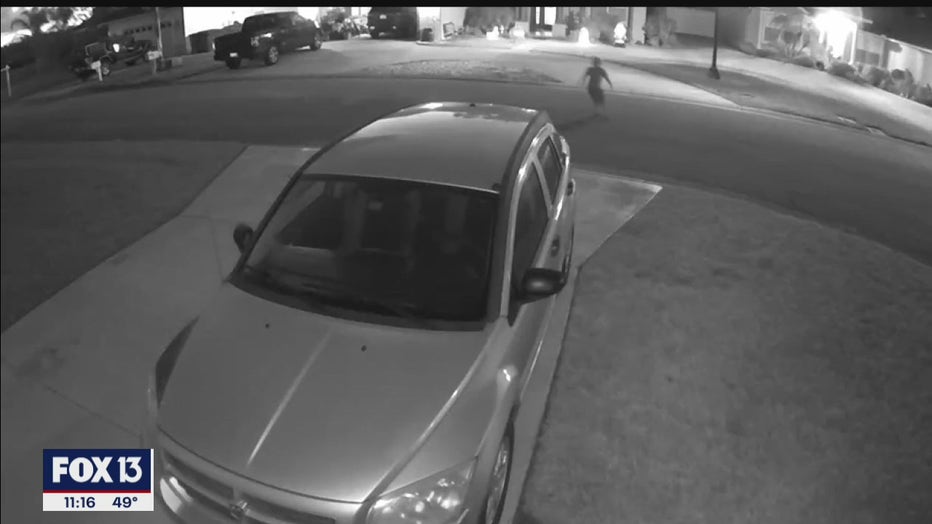 The toy happened to catch the eye of an envious driver who made a quick U-turn and came back to snatch it.

"He watched the lady get out of the vehicle, put it in there, and drive away," Cannon said.

Video shows the white SUV speed off, trailed by the screams of the distraught little boy.

"She just took my scooter!" you can hear him shriek.

In seconds, the driver and the scooter were gone.

"I really, really hope that she looks back at this video, she sees this video and sees what she did to that little kid because it really was hard watching him run," said Diana, who lives close by.

Neighbors who saw what happened described the suspected thief as a woman possibly in her 30s, with shoulder-length brown hair.

"That's a low-life person in my book," Cannon said.

Neighbors hope Polk County deputies catch up to the suspected thief soon so she can't break another child's heart.

"She was looking for something to steal and that, I believe, is someone who has no heart and needs to be brought to justice," Diana said.

Neighbors in Remington Oaks have already made sure the little boy has a new scooter on the way.

In fact, they've gotten so many offers for donations, they plan to set up a fundraising page so they can continue collecting presents for families in need.