Blind on the 78th floor: 9/11 survivor shares story of escape

ST. LEO, Fla. - The horrors experienced on September 11, 2001 are still difficult to imagine, but try to imagine being on the 78th floor of the North Tower when the first plane hit - and being blind.

A man whose guide dog helped him escape the nightmare now travels the country to tell his story and educate people about issues surrounding accessibility. Michael Hingson, 69, is visiting students at Saint Leo University to give them a new perspective on people with disabilities.

These days, his 3-year-old guide dog Alamo helps him through spaces he can’t see. The California native was born blind.

"Just because we don't have eyesight, it doesn't mean we can't function in the world," said Hingson.

He showed his independence to the world on September 11, 2001. Hingson was working on the 78th floor of the World Trade Center in New York City when a plane hit the building. At that time, his guide dog, Roselle was with him. 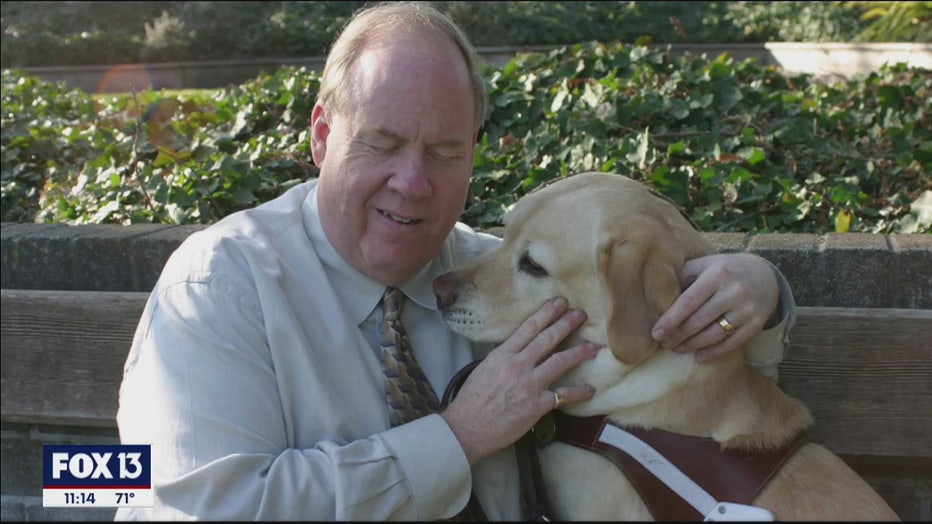 "This building moving around woke her up, and so as soon as the building stopped moving, I moved toward my desk and met Roselle coming out from under my desk," said Hingson.

The yellow lab guided him and others down the stairs of the North Tower and onto the streets minutes before the South Tower collapsed.

"And as I began to run, I actually remember thinking, ‘God, I can't believe you got us out of a building just to have it fall on us,’" said Hingson, who added he was about 100 yards away when the South Tower collapsed. "And when I did that, the first thing I remember was hearing a voice as clearly as you hear me, a voice in my mind saying, ‘Don't worry about what you can't control, focus on running with Roselle and the rest will take care of itself.’"

Hingson told FOX 13 he trusted Roselle to guide him to a safe place and she did. Now the 9/11 survivor takes his story on the road as a motivational speaker and accessibility advocate. This week, he is teaching Saint Leo University students about inclusion under a campus program as Woodrow Wilson Visiting Fellow of 2020.

"I decided that if it would help educate people about blindness and get people to understand that blindness isn't the problem. It's attitudes that are the problem," he said.

By sharing his experience, Hingson said it allows others to see broader life lessons like teamwork and unity.

"We need to remember what that was like and find ways to work together. All of us need to do that," he said.

Hingson will give a lecture Wednesday on his 9/11 story and accessibility. It starts at 7 p.m. at Saint Leo’s Kirk Hall, and it’s free and open to the public.