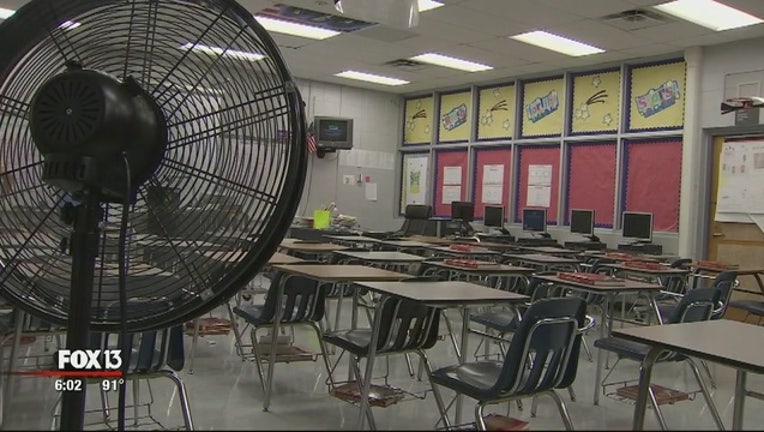 Dozens of schools have needed A/C repairs since the start of the school year. At Webb Middle School, Principal Frank Diaz said some classrooms haven't had cool air for several days in a row.

"We have times where we have three, four, five rooms with air conditioning issues, so it just makes it difficult to manage moving teachers around, so there are times that our students stay in the room and then we just push through it," Diaz said.

Angelina Pinder-Davis, who is an 8th-grade teacher at Webb, said her classroom hasn't had air conditioning for nine days. Her normal classroom is now empty while she teaches her students in another room.

"It's more frustrating for my students because usually, they come in, they get started, but because of the A/C problem in this classroom, they come in, they sit down, and all they feel is the temperature of the classroom. And they don't begin their work, so they're complaining to me about how hot it is," she said. "It's very disruptive because we have a curriculum that we're supposed to teach and we have a time period to teach it."

Pinder-Davis said having A/C is a quality-of-life issue.

"If you're living in Florida, 90-degree temperatures, and then you're in a classroom that's really cement block, you have to have air," she said.

"We're continuing to still see that A/C is a problem. Our crews get out there as quickly as they can and repair," said district spokesperson Tanya Arja.

Arja said it's hard to pin down an exact number of schools that are currently experiencing issues because it fluctuates daily. But she knows how many are in urgent need of a new system.

"We definitely need to replace at least 40 right away and there are more down the line that we need to replace," she said. "We want to make sure that the learning environment for the children is conducive for that."

A half-cent sales tax increase was proposed and placed on the November ballot. The school says that money, if approved by the voters, will help resolve many of the A/C issues.

A full school-by-school list of the projects that would be funded by the half-cent sales tax increase is on the district's website.