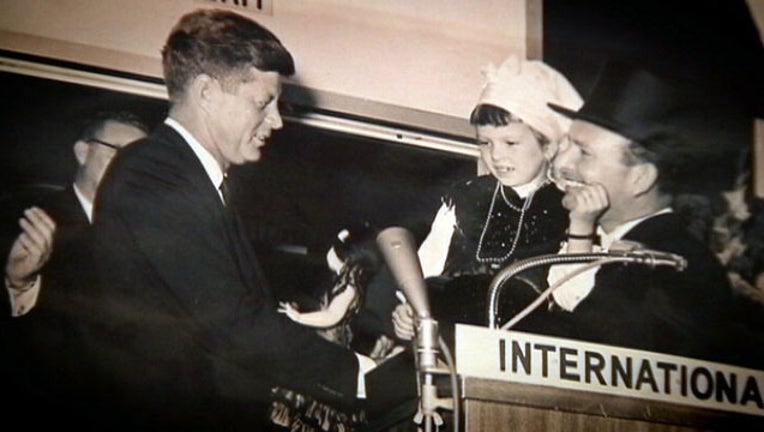 The doll is 50 years old, but when Marlene Maseda Lee takes her out of the box, it takes her back to November 18, 1963 -- when she welcomed President John F. Kennedy to her hometown of Tampa.

In old documentary film and photographs, Marlene is shown presenting the doll to President Kennedy as a gift for his daughter Caroline, about the same age as Marlene.

"Dear Mr. President, this doll is for your daughter," she said as she handed it to the president during an event at a Tampa hotel.

THE DOLL AND THE DRESS

"That was the last gift he gave to her before he died," Marlene recalled as she held the doll that she lifted from the box.

She remembers that her father dressed her in a traditional Spanish costume to represent Tampa's rich cultural heritage. He took her to the airport to pick up the doll that was flown in from Spain. They brought it to the hotel where her father was part of Tampa's official welcome. He gave the president a box of Tampa cigars. Marlene gave him the doll.

"He invited us to the White House the following summer so I could play with Caroline," she said.

It was a promise never fulfilled. Four days later, the president was killed.

THE TWIN AND THE SORROW

The doll Marlene keeps in the box is actually a twin to Caroline's. Her dad gave it to her as a reward for her performance with the president.

"It was one of the most wonderful experiences of my life," Marlene continued.

She remembers hearing the news that President Kennedy was killed.

"I remember crying and just telling my mother, 'He was my president.'"

She put her doll back in the box, but she will never forget the last gift she gave to Caroline.

FIRST IN A SERIES: President John F. Kennedy visited Tampa on November 18, 1963, just four days before he was assassinated in Dallas. Lloyd Sowers interviewed seven people with special stories of the Tampa visit and how they were affected when the tragic news came from Dallas.