PINELLAS PARK, Fla. - A landmark flea market in Pinellas Park will not be reopening after the coronavirus shutdown. With "a heavy heart," the owners of the Wagon Wheel and Mustang Flea Markets announced Wednesday that they are closing for good.

The 125-acre Wagon Wheel market has been a popular part of the Pinellas County community for more than 55 years, offering second-hand treasures of all kinds.

Back in 1966, used-car salesman Hardy Huntley and his wife Janet enjoyed shopping yard sales and fixing up the things they bought. They decided to open a stand along Park Boulevard to sell some of those items. The market grew from there, eventually adding food trucks and permanent buildings.

Even a devastating fire in 1986 couldn't keep the gates closed; the market reopened the next day and they eventually rebuilt the nearly 2,000 vendor booths, famously open "rain or shine." 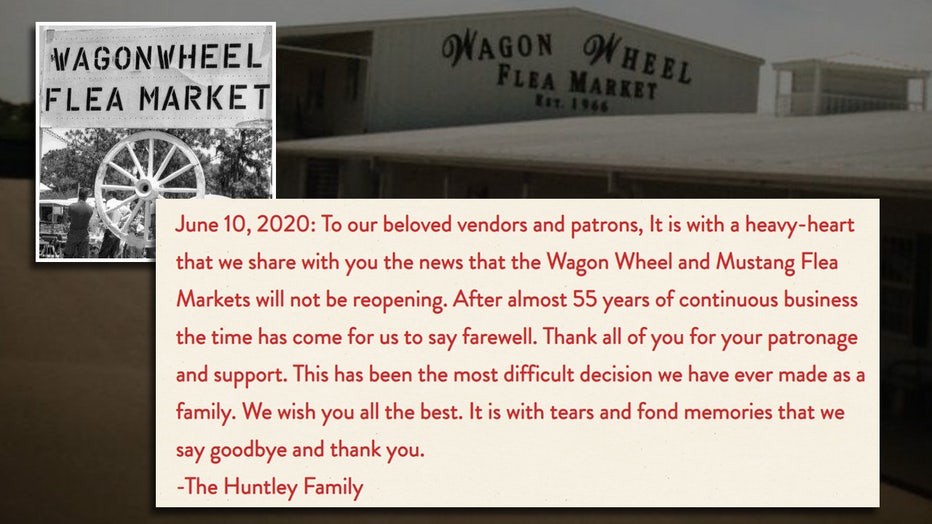 But the COVID-19 pandemic was apparently too much. The market has been closed since March, locking out vendors and choking revenue. Now, it will not reopen.

Wednesday's Facebook post from the Huntley family thanked everyone for their patronage and support, saying the decision to close was the most difficult they have made as a family.

"It is with tears and fond memories that we say goodbye and thank you," it concluded.

The post goes on to state that vendors who currently have items on market grounds can remove the merchandise and displays over the next few days and weeks as long as they adhere to social distancing guidelines.  No one will be allowed on the premises after June 30.

FOX 13 reached out to the Huntley family via Facebook to ask about the reason for the closure and what is next for the property, but they did not reply to our inquiry.