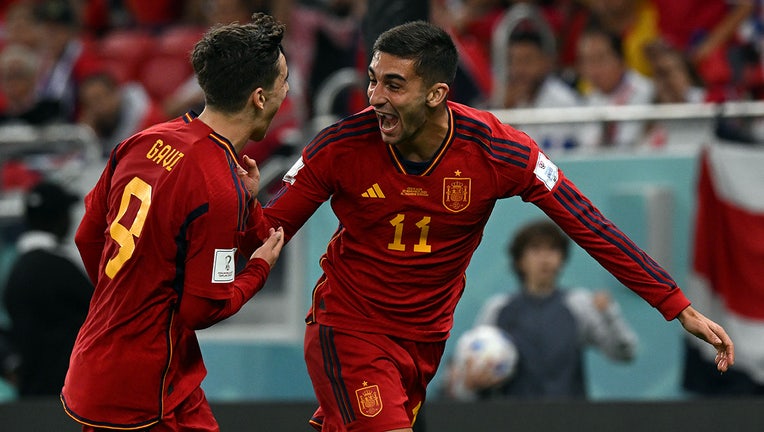 DOHA, Qatar - The fourth day of World Cup games has wrapped up, with another upset. Japan beat Germany in the first competitive meeting between the two nations. And there were no goals between Morocco and Croatia, but plenty -- all on one side -- when Spain met Costa Rica. Later, Canada returned to the world stage, but couldn't capitalize on a penalty. 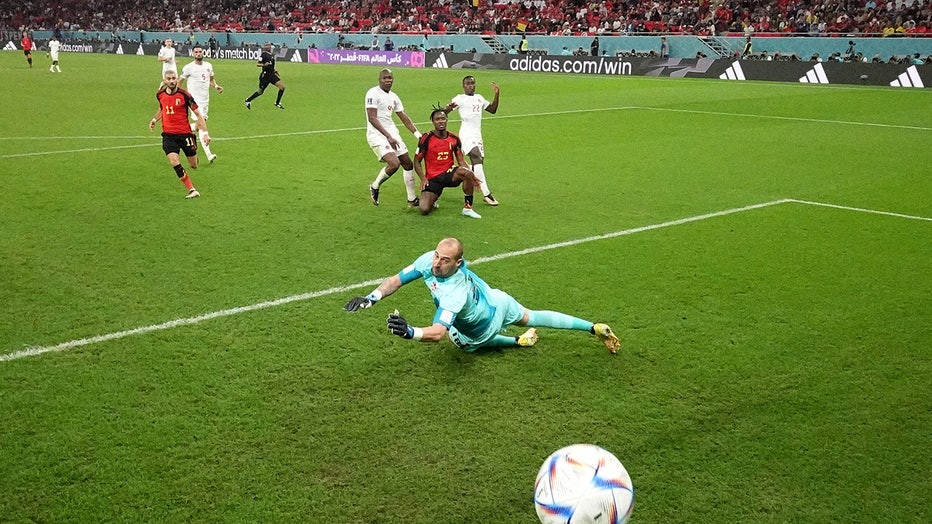 Thibaut Courtois saved an early penalty and Michy Batshuayi scored the lone goal to give Belgium a 1-0 win over Canada at the World Cup to spoil the North American team's return to the tournament after 36 years.

The Canadians have yet to collect a point or even score a goal in four World Cup matches. That includes the three games from their debut in 1986.

Batshuayi scored in the 44th off Toby Alderweireld's long pass. 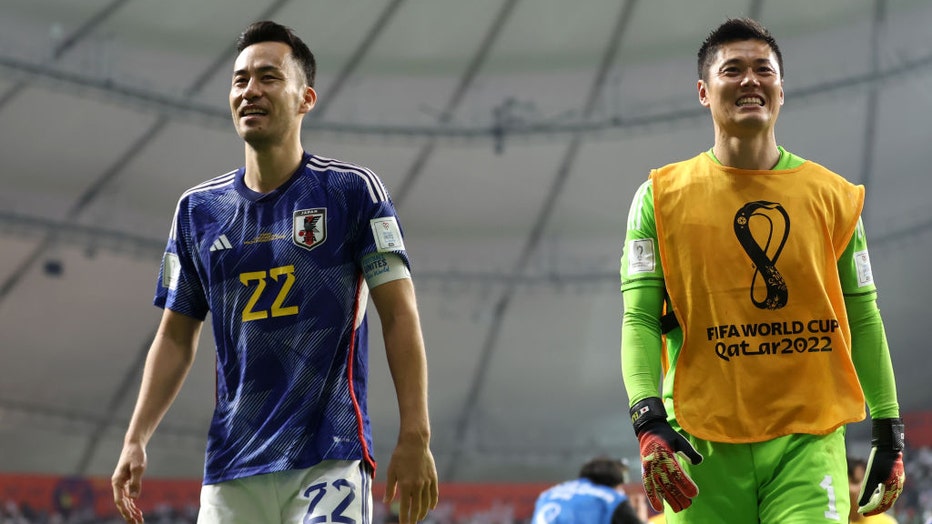 Substitutes Ritsu Doan and Takuma Asano scored late goals to give Japan a come-from-behind 2-1 victory over Germany at the World Cup.

Ilkay Gündogan had given four-time champion Germany the lead with a first-half penalty. But Doan, who plays for German team Freiburg, pounced on a rebound to equalize in the 76th minute after Germany goalkeeper Manuel Neuer blocked a shot from Takumi Minamino.

Then Asano, who plays for German team Bochum, sprinted clear of Nico Schlotterbeck and beat Neuer from a narrow angle in the 83rd.

It was the first competitive meeting between the two nations.

Before the game, Germany’s players covered their mouths during the team photo in an apparent rebuke to FIFA following its decision to stop plans to wear armbands to protest discrimination in host nation Qatar.

The win came a day after Argentina’s 2-1 upset loss to Saudi Arabia. 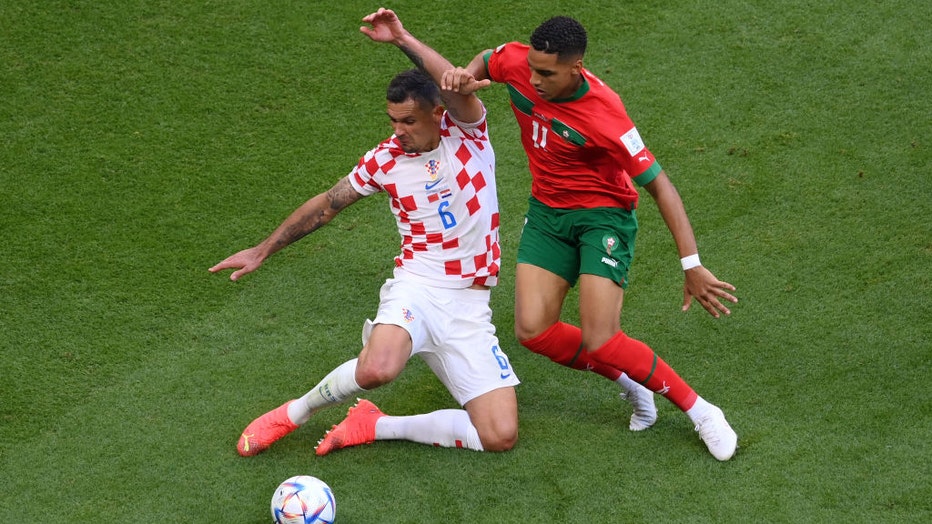 Dejan Lovren of Croatia and Abdelhamid Sabiri of Morocco compete for the ball during the FIFA World Cup Qatar 2022 Group F match between Morocco and Croatia. (Justin Setterfield/Getty Images)

Morocco held 2018 finalist Croatia to a 0-0 draw at the World Cup in another strong performance by a team from an Arab country.

Morocco’s promising performance came 24 hours after Saudi Arabia sparked the first World Cup in the Middle East into life by beating Lionel Messi’s Argentina in one of the biggest upsets in the tournament’s history. Paris Saint-Germain star Achraf Hakimi had the best chance for Morocco with a thumping second-half shot punched away with both fists by goalkeeper Dominik Livakovic.

Morocco managed to stifle Croatia captain Luka Modric, who won the best player award at the last World Cup when he led his country to the final before losing to France. 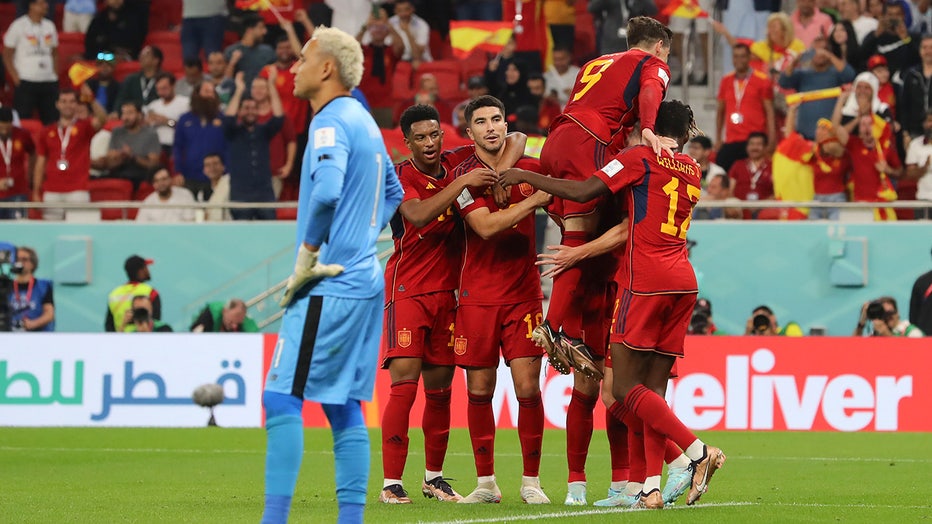 Keylor Navas of Costa Rica reacts as Alvaro Morata of Spain is mobbed by team mates after scoring to give the side a 7-0 lead during the FIFA World Cup Qatar 2022 Group E match between Spain and Costa Rica at Al Thumama Stadium on November 23, 2022 i

Spain’s young squad got off to a high-scoring start at the World Cup, routing Costa Rica 7-0 on Wednesday.

Not long after Japan surprised Germany 2-1 in the other Group E match, Spain avoided any chance of an upset with Dani Olmo, Marco Asensio and Ferran Torres scoring a goal each in the first 31 minutes. Torres, Gavi, Carlos Soler and Álvaro Morata added to the lead in the second half.

Olmo’s goal was the 100th at World Cups for Spain, which became the sixth nation to score more than 100 times in the tournament.

It was the first time Spain has scored seven goals in a World Cup match.

With 18-year-old Gavi and 19-year-old Pedri starting, Spain became the first European nation with two teenagers in the starting lineup of a World Cup match in 60 years, according to statistics platform Opta.

Gavi then became the youngest goal scorer at the World Cup since Pelé in the 1958 final, also according to Opta.

Two of the best players in soccer start World Cup competition Thursday as Cristiano Ronaldo and Neymar both seek history in Qatar.

Ronaldo is attempting to become the first male soccer player to score in five different World Cups when he leads Portugal against Ghana. Marta of Brazil has scored in five Women's World Cups.

Neymar, meanwhile, is the leader of a Brazil team seeking a record-extending sixth World Cup title but first in 20 years. Brazil plays Serbia in its first match.

RELATED: Cristiano Ronaldo out to impress in Portugal’s first game at the World Cup

All attention is on Ronaldo, though, following his messy but mutual split this week with Manchester United.

The 37-year-old forward, likely playing in his final World Cup, gave an explosive interview only days before traveling to Qatar that criticized manager Erik ten Hag and United's owners, triggering the split. And on Wednesday, Ronaldo was banned for two Premier League matches and fined 50,000 pounds ($60,000) for hitting a phone out of a fan’s hand at Everton last season.

The ban will follow Ronaldo to whatever new club he joins in any country but does not apply to the World Cup.

Ronaldo said before his Manchester United departure that the drama has nothing to do with the World Cup. Teammate Bruno Fernandes agreed.

Neymar, meanwhile, has been deliberately quiet since arriving in Qatar with his only public statement a social media post with a sixth star photoshopped onto his shorts around Brazil’s logo — a clear indicator his only goal is another World Cup title for his country.

Neymar has five goals in six games this year for Brazil, all on penalty kicks.

Serbia has yet to advance out of the group stage in three previous World Cup appearances as an independent nation. It has also failed to qualify for the European Championship in five tries.

The forward fractured his left eye socket in a collision while playing for Tottenham earlier this month in a Champions League match and hasn't played since Nov. 1. He's worn a Batman-style protective mask while training in Qatar and likely will have it on again for the match.

Son runs South Korea's offense, which is based on his ability to shoot with both feet and his accuracy on dead-ball plays.

Uruguay is led by Luis Suárez and Edinson Cavani, both playing in their fourth World Cup. Suárez's seven World Cup goals is one short of national record holder Óscar Míguez, who played on the 1950 team that won the title.

Two teams meet for the first time when Switzerland and Cameroon play, with the Swiss trying to make it to the knockout round for the third consecutive World Cup.

Xherdan Shaqiri, who plays for the Chicago Fire of Major League Soccer, is in the World Cup for the fourth time and is Switzerland's offensive leader. He's been directly involved in 48% of its 23 goals in its last four major tournaments, with eight goals and three assists.

Cameroon finished third at the African Cup of Nations but has won only one of its last five matches, and that victory was against 141st-ranked Burundi. The Indomitable Lions are the fourth-lowest ranked team in the tournament, but after Saudi Arabia shocked Argentina earlier this week, the five-time African champions have hope.

It is Cameroon's eighth World Cup, the most among African countries, but the national team has lost its last seven matches — a record only beaten by Mexico’s nine consecutive losses between 1930 and 1958.

One of the biggest upsets in World Cup history occurred Tuesday when Argentina and Lionel Messi were beaten 2-1 by Saudi Arabia, the second-lowest ranked team in the tournament.

The loss for the South American champions was a depressing start to Messi’s quest to win the one major title that has eluded him. Playing in his fifth World Cup, Messi said he felt "dead" after the loss.

"It’s a very hard blow because we did not expect to start in this way," Messi said.

The upset ranks alongside Cameroon’s 1-0 win over an Argentina team led by Diego Maradona in the opening game of the 1990 World Cup; Senegal’s 1-0 victory over defending champion France in the 2002 tournament opener; and the United States beating England by the same score in 1950.

The tournament continued to be plagued by problems away from the field as fans again struggled to upload their tickets for a second consecutive day on the FIFA application, and spectators donning rainbow-inspired gear complained they were hassled attempting to enter stadiums.

The ticketing issue began Monday when England played Iran and fans said a glitch in the app caused hundreds to miss the start of the match. The next day, hundreds were lined up at a "Ticket Resolution Point" at a convention center in central Doha showing the error messages on their mobile apps.

The rainbow imagery, meanwhile, is a symbol of LGBTQ rights and its display at the World Cup is controversial because same-sex relations are criminalized in Qatar. The Welsh soccer federation has asked FIFA for clarity on reports some of its fans were stopped from wearing their rainbow-colored bucket hats into stadiums.