The retired Navy SEAL, whose career was documented in the bestselling "American Sniper" autobiography and later blockbuster film, is remembered as a husband and father who aimed to help other military veterans struggling with PTSD.

Nine years after the tragic death of Chris Kyle, his memory lives on in the form of a bestselling autobiography, an Oscar-nominated blockbuster movie directed by Clint Eastwood, and multiple foundations created to honor the legacy of a retired Navy SEAL whose life was cut short.

Kyle, 38, and his friend Chad Littlefield, 35, were both shot and killed on Feb. 2, 2013 at a Texas gun range by former Marine Eddie Ray Routh, who was later convicted of murder and sentenced to life in prison without parole.

Kyle, Littlefield and Routh were all together when they arrived at a shooting range at Rough Creek Lodge and Resort, located about 70 miles southwest of Fort Worth, Texas. Family members said Routh suffered from post-traumatic stress disorder from serving in Iraq and in Haiti after the devastating 2010 earthquake, and Routh’s mother had asked Kyle to help her troubled son.

During Routh’s trial, Kyle’s widow, Taya Kyle, testified that Littlefield and her husband were close, and enjoyed spending time with veterans as a way to help them ease back into civilian life. She detailed her husband’s own struggles after completing four tours of duty in Iraq, saying he also suffered from PTSD, could be irritable at times and was slowed by physical ailments. 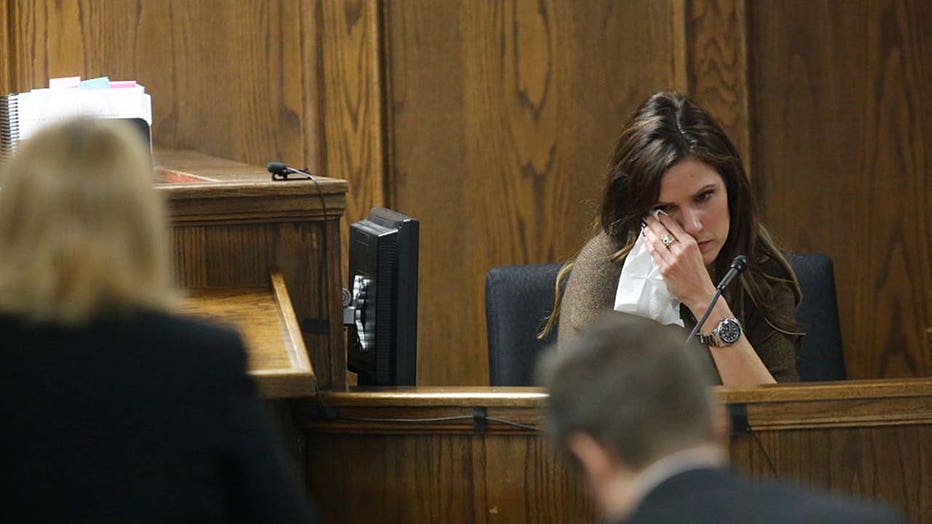 During the trial, attorneys said Kyle described Routh as "straight-up nuts" in a text message to Littlefield as they drove to the resort.

An employee of the resort discovered the bodies of Kyle and Littlefield, and each had been shot several times. Authorities said Routh fled the range in Kyle’s truck to his sister’s home, where he told her he had killed two people and was later arrested.

Taya Kyle gave a eulogy, while country singer Randy Travis sang "Whisper My Name," a meaningful song for the couple. After the service, bagpipers played as military personnel carried out Kyle’s flag-draped coffin, while many in the crowd saluted. 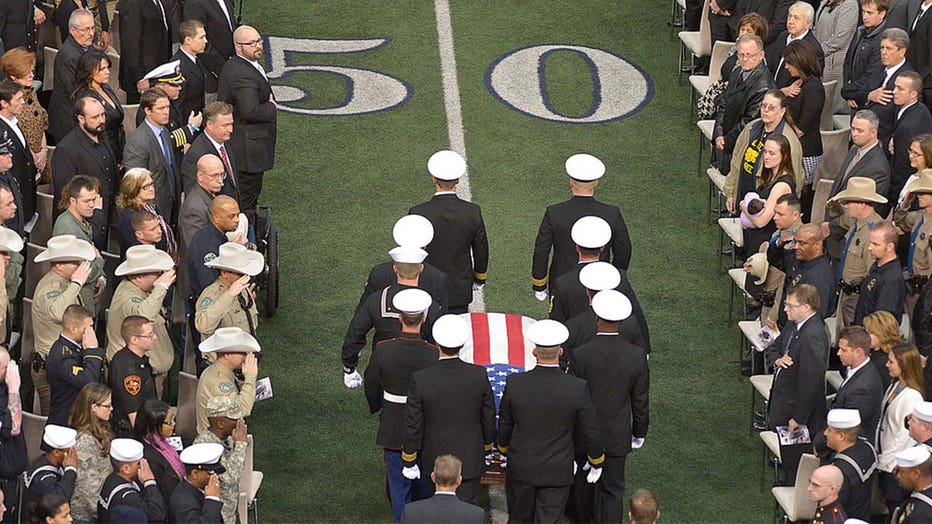 FILE - Members of the military carry the casket of Chris Kyle at Cowboys Stadium in Arlington, Texas, Monday, February 11, 2013. Kyle was a highly decorated former Navy SEAL sniper who was shot and killed at a shooting range. (Max Faulkner/Fort Worth Star-Telegram/Tribune News Service via Getty Images)

Kyle, who had more than 160 confirmed kills during his tours in Iraq, detailed his sniper career in the autobiography "American Sniper: The Autobiography of the Most Lethal Sniper in U.S. Military History." Published in 2012, the book appeared on the New York Times Best Seller list for 37 weeks.

During Kyle’s career from 1999 to 2009, Iraqi insurgents feared him so much, they named him al-Shaitan, or "the devil," and placed a bounty on his head, according to the American Valor Foundation, a nonprofit formed by his family that aims to support the lives of military veterans and first responders.

"Kyle earned legendary status among his fellow Teammates, Marines, and other military soldiers and airmen, whom he protected with deadly accuracy from rooftops and stealth positions," the foundation states on its website.

During his time on the battlefield, the foundation said Kyle was shot twice, survived multiple helicopter crashes and was involved in six IED attacks. He was awarded two Silver Stars, five Bronze Stars with Valor, two Navy and Marine Corps Achievement Medals, as well as one Navy and Marine Corps Commendation during his career. 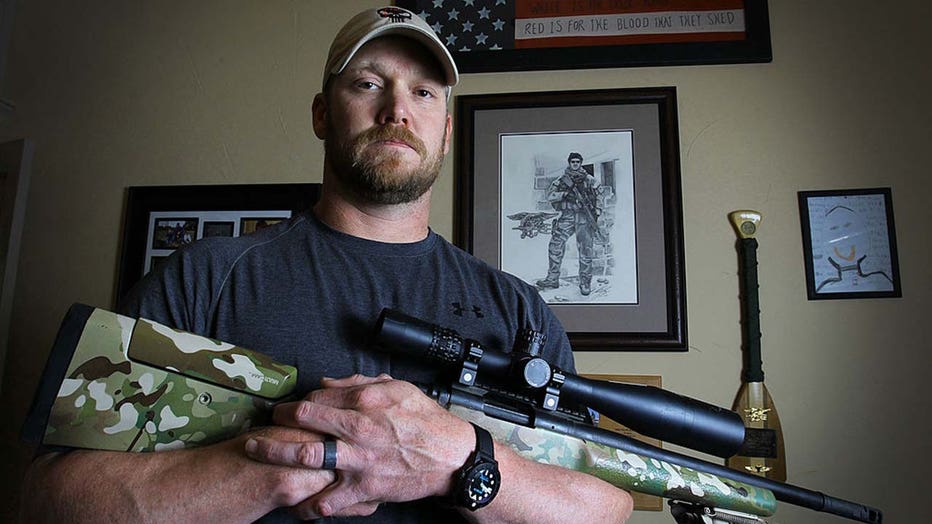 FILE - Chris Kyle, a retired Navy SEAL and bestselling author of the book "American Sniper: The Autobiography of the Most Lethal Sniper in U.S. Military History", holds a .308 sniper rifle in this April 6, 2012, file photo. (Paul Moseley/Fort Worth Star-Telegram/Tribune News Service via Getty Images)

A 2014 film adaptation, loosely based on his autobiography and starring Bradley Cooper, further spread Kyle’s name into the minds of Americans after his death. The film received six nominations at the Academy Awards, including Best Picture, Best Adapted Screenplay and Best Actor for Cooper. It won for Best Sound Editing.

Kyle’s legacy lives on in other ways beyond Hollywood. In August 2013, then Texas Gov. Rick Perry signed Senate Bill 162, also known as the "Chris Kyle Bill," which recognizes the achievements of service members with special operations training in the issuance of occupational licenses. Taya Kyle attended the signing ceremony.

On Feb. 2, 2015, exactly two years after his death, Gov. Greg Abbott declared the date "Chris Kyle Day" in Texas, where he was raised and lived after serving in Iraq. Taya Kyle also founded the Chris Kyle Frog Foundation to help strengthen military and first responder marriages and families.

On the three-year anniversary of Kyle’s death, his widow shared a heartfelt post on Facebook reflecting on the loss of her husband and highlighting the lessons she has learned in living with her grief. 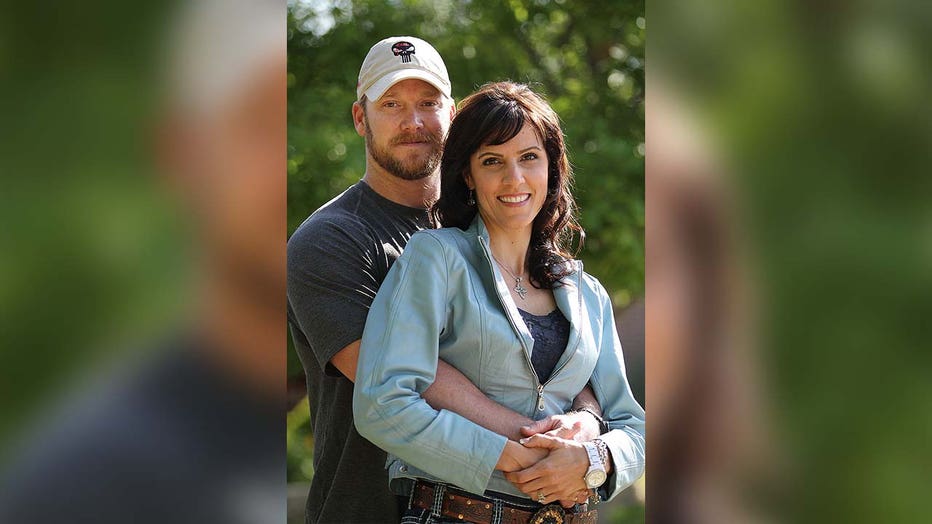 FILE - Chris Kyle, a retired Navy SEAL and bestselling author of the book "American Sniper: The Autobiography of the Most Lethal Sniper in U.S. Military History," is seen with his wife, Taya, April 6, 2012.  (Paul Moseley/Fort Worth Star-Telegram/Tribune News Service via Getty Images)

"These last few months have been particularly hard. I think we all try to make sense of our lives and sometimes we have to get comfortable with it not making sense," Taya Kyle wrote.

"I have learned the way you love a child, or any person for that matter, will be frozen in time when your number comes up, so make it a love that will carry them through life," she continued. "Chris did an extraordinary job of this and I am grateful every single day."

"There was only one Chris Kyle. People say you learn to live with the pain, and maybe that's true. I have learned how to survive, to do my best at carrying on his spirit and his legacy but I have not learned to fully live without the man."

She concluded: "To Chris, thank you for loving me and letting me love you. As my wedding ring is inscribed, you are ‘My love, My life.’ I would run this race, loving you every step of the way, all over again. The best thing I ever did was give my heart to you."