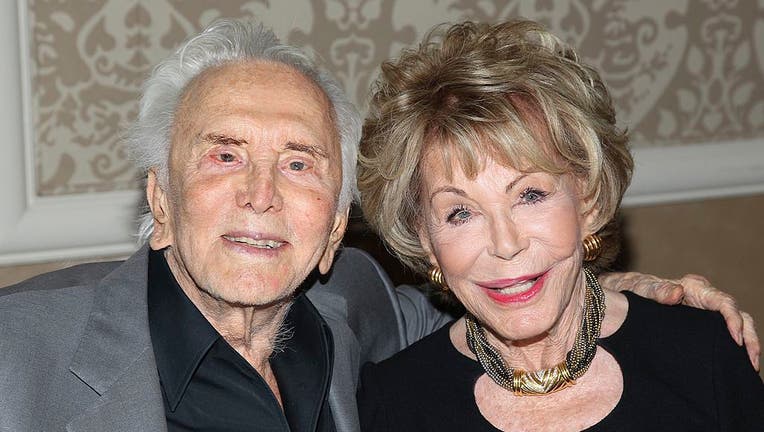 "My father could never keep a secret. Anne was just the opposite,'' Michael Douglas said in a statement released by the family. "That's why when I read their co-authored book, `Kirk and Anne,' in which she talked about her early life in Germany; her war years in occupied Paris; her career before she met my father; she also included their private correspondence, which gave me new insights into their courtship and marriage.

"Anne was more than a stepmother, and never `wicked.' She brought out the best in all of us, especially our father. Dad would never have had the career he did without Anne's support and partnership. Catherine and I and the children adored her. She will always be in our hearts.''

Anne Douglas was married to legendary actor Kirk Douglas for more than 60 years, until his death last year. The couple originally wed in Las Vegas in 1954, but they had a more lavish ceremony when they renewed their vows 50 years later, in 2004.

She was an avid philanthropist, co-founding the Cedars-Sinai Research for Women's Cancers. She and her husband also led a massive campaign to refurbish playgrounds at Los Angeles Unified School District campuses, renovating more than 400 and always personally attending dedication ceremonies when they opened.

She also funded the Anne Douglas Center for Women at the Los Angeles Mission downtown, and the Douglas Foundation has contributed more than $118 million to a variety of causes, including the Motion Picture and Television
Home's Alzheimers and dementia unit, Sinai Temple's Kirk and Anne Douglas
Childhood Center and St. Lawrence University's Kirk Douglas scholarships for
minority students.

Donations in her memory may be made to the Anne Douglas Center at the Los Angeles Mission, 310 Winston St., Los Angeles, CA 90013.