The Arctic may now be accelerating global warming due to melting permafrost, NOAA report finds

The NOAA's 2019 Arctic Report Card found that permafrost region ecosystems could be releasing as much as 1.1 billion to 2.2. billion tons of carbon dioxide annually.

LOS ANGELES - Arctic sea ice melt usually begins to solidify again in October, but for the the first time since record keeping began, the Laptev Sea in Siberia hasn’t frozen yet.

Arctic sea ice melt season typically lasts from March until September, before sea ice begins to freeze over again. But this year, the sea ice is not recovering as expected.

"Because of the unusually low ice growth in October, the current ice extent is now the lowest for any October in the past 41 years,” Severe Weather Europe wrote.

Ocean temperatures in the area recently increased to more than 5 degrees Celsius above average, following an early decline of last winter’s sea ice and a record-breaking heat wave.

Graphics of sea ice in the Laptev Sea typically show a seasonal trend of ice loss and refreezing, but this year’s line remains flat, illustrating a record amount of open sea in the Arctic.

“The lack of freeze-up so far this fall is unprecedented in the Siberian Arctic region,” Zachary Labe, a postdoctoral researcher at Colorado State University, told The Guardian. “2020 is another year that is consistent with a rapidly changing Arctic. Without a systematic reduction in greenhouse gases, the likelihood of our first ‘ice-free’ summer will continue to increase by the mid-21st century.”

In September, an enormous chunk of Greenland’s ice cap broke off in the far northeastern Arctic, further displaying the impacts of global warming. 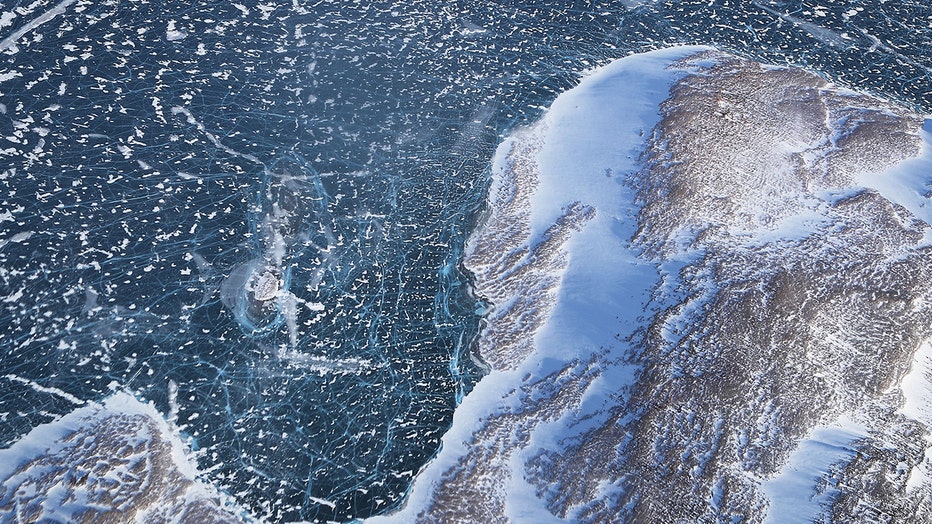 Greenland's ice sheet is retreating due to warming temperatures. NASA's Operation IceBridge has been studying how polar ice has evolved over the past nine years and is currently flying a set of eight-hour research flights over ice sheets and the Arct (Mario Tama)

The glacier section that broke off was 110 square kilometers (42.3 square miles). It came off of the fjord called Nioghalvfjerdsfjorden, which is roughly 80 kilometers (50 miles) long and 20 kilometers (12 miles) wide, the National Geological Survey of Denmark and Greenland said.

Annual end-of-melt-season changes for the Arctic’s largest ice shelf in Northeast Greenland were measured by optical satellite imagery, the survey known as GEUS said. It showed that the area's ice losses for the past two years each exceeded 50 square kilometers (19 square miles).

Increasing temperatures in Siberia have been linked to prolonged wildfires that grow more severe every year and the thawing of permafrost — a huge problem because buildings and pipelines are built on them. Thawing permafrost also releases more heat-trapping gas and dries out the soil, which increases wildfires, said Vladimir Romanovsky, who studies permafrost at the University of Alaska Fairbanks.

“In this case it’s even more serious, because the previous winter was unusually warm,” Romanovsky said. The permafrost thaws, ice melts, the soil subsides and then it can trigger a feedback loop that worsens permafrost thawing and “cold winters can’t stop it,” Romanovsky noted.

2020’s Siberian heat contributed to raising the world’s average temperature to the second-hottest on record for the period of January to May, a recent study titled, “Prolonged Siberian heat of 2020,” found.

“The results showed with high confidence that the January to June 2020 prolonged heat was made at least 600 times more likely as a result of human-induced climate change,” the study authors wrote.

“The Arctic is figuratively and literally on fire — it’s warming much faster than we thought it would in response to rising levels of carbon dioxide and other greenhouse gases in the atmosphere, and this warming is leading to a rapid meltdown and increase in wildfires,” University of Michigan Environmental School Dean Jonathan Overpeck, a climate scientist, told the Associated Press.

This long-term trend of ice loss could ultimately accelerate dangerous environmental changes in the Arctic and impacts to the entire ecosystem, causing certain wildlife populations to become stressed and forcing them to change their habits.

A newly published study examining polar bear habitats in Alaska found that forthcoming large-scale industrial activities could have an effect on polar bear populations — a species already fighting for survival due to climate change factors including rapid ice loss.

The study, titled, “Seismic survey design and impacts to maternal polar bear dens,” highlighted the endangered animals’ continual exposure to climate change, along with the impact of proposed oil drilling on the animals.

According to the study, the Coastal Plain of the Arctic National Wildlife Refuge in northeastern Alaska is an important maternal denning area for polar bears, but recent legislation opened the area for potential oil and gas development.