The list of companies at the center of this investigation for potentially marketing to children includes three in Tampa Bay.

Moody made the announcement at Plant High School and explained that the health and safety of children is her priority.

"Government must act quickly and with purpose any time we see a rapid rise in addiction which turns into an epidemic," Moody said. "We will focus on whether these companies intentionally targeted minors, whether their claims regarding health effects are based in reality and whether or not they are using effective online age-verification process."

The attorney general said she wants to determine if vaping businesses have been trying to lure in young customers with advertising and flavored products.

"The developing brain is affected by the use of nicotine and that is why we are acting with urgency. We are acting now. And we are not waiting for the federal government to get its act together in regulating these products any longer," she said. "I will not let companies play fast and loose with the precious lives of Florida youth and so, while this investigation will take time because we will be thorough and it involves over 20 vaping companies. In the meantime, understand that these products are not harmless. They do contain nicotine and other harmful chemicals."

The list of companies at the center of this investigation includes three in Tampa Bay.

One of the companies listed by the attorney general is All Access Vapor in Lutz. The news took the company's sales and marketing manager, Jason Filippini, by surprise.

"I don't have anything to hide," he said. "We do not market to children. There's nothing in this store that's child-related. We are not putting ads out into the world in any medium." 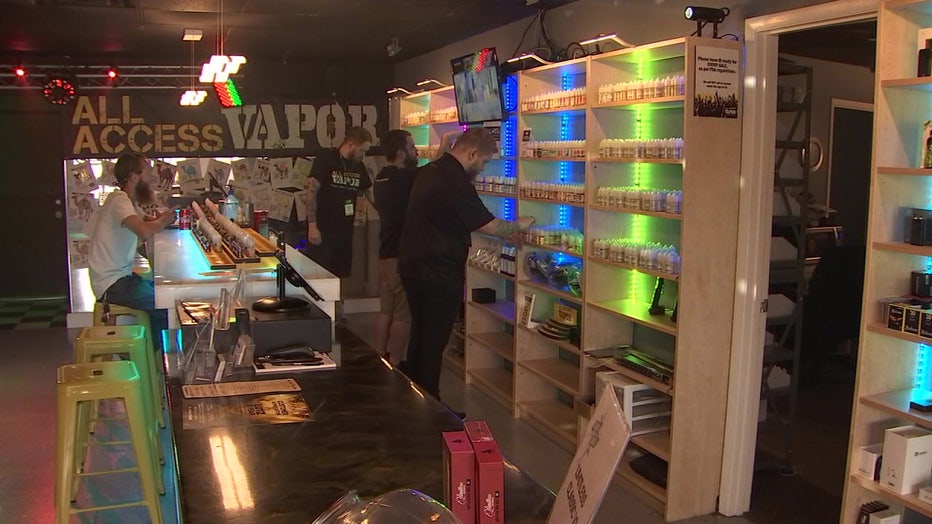 He said All Access Vapor is above board and has been an upstanding company for five years, while helping countless customers quit smoking in the process.

"If I can get somebody to stop smoking two packs a day, cutting down on their nicotine intake because they like strawberry-watermelon lemonade, how is that not a win?" Filippini said, adding he hopes the AG includes trustworthy vaping businesses in the discussion. "Wouldn't you want to have all of the facts in front of you to make the most just and/or educated decision?"

The Centers for Disease Control and Prevention has reported nearly 1,300 vaping-related cases nationwide, with 26 reported deaths.

The Florida Department of Health, meanwhile, released a report in April noting a 60 percent increase in the use of e-cigarettes among Florida high school students.

"I think the one-fourth number is a severe low-ball. It's not even close to that. It's much higher and I just think it's the hidden aspect that makes it so scary because it's something that people don't know is going on as much as it is," offered David Tuohy, Plant's senior class president. "I really think it is an epidemic because it's something that is spreading so vastly based on kids just trying it once."