TAMPA, Fla. - The attorney for a man accused of plotting a terror attack in the Bay Area says federal agents violated the suspect’s rights and wants evidence in the case thrown out.

Muhammed Momtaz al-Azhari’s attorney described a "secret spy plane surveillance program" that illegally gathered 900 video clips of his client. Federal prosecutors argue the FBI did everything by the book and want the evidence to stay.

Back in 2020, the FBI announced the arrest of 23-year-old Muhammed Momtaz al-Azhari, of East Tampa, who they say was loyal to ISIS.

He was charged with providing material support to ISIS after they say he stockpiled weapons, expressed allegiance to the "caliphate" and worshipped the Orlando nightclub shooter.

A Tampa man has been arrested for providing material support to ISIS.

PREVIOUS: DOJ: Tampa man accused of helping ISIS said 'Americans got what they deserved' on 9/11

Arresting documents said al-Azhari told an informant he wanted "to die in a shootout with disbelievers. I want to take revenge."

"I don't want to take four or five. I want to take at least 50, like brother Omar Mateen in Orlando did," al-Azhari allegedly said.

"This is a motivated terrorist. Let’s call him what he is," said defense attorney Anthony Rickman, who reviewed the court documents but is not involved in the case.

The FBI has charged a Tampa man with providing material support to ISIS after they say he stockpiled weapons, expressed allegience to the "caliphate" and worshipped the Orlando nightclub shooter.

"He declared to a confidential source that he is indeed ISIS and carrying out jihad on behalf of ISIS," explained Rickman.

However, al-Azhari’s legal team is pushing back on some of the evidence against him.

Woman called for 'jihad' before trying to stab officer

A woman who was killed while trying to stab two Temple Terrace officers had called for 'jihad' in a note she wrote before the attack.

In new court documents, the defense says some of the FBI's surveillance tactics were illegal and a violation of al-Azhari's rights.

His attorney described a "secret spy plane surveillance program" that used high-tech video cameras with powerful lenses to zoom in on his client while he did things like getting his mail, going to a medical clinic, visiting his sister, going the beach, and going to work. 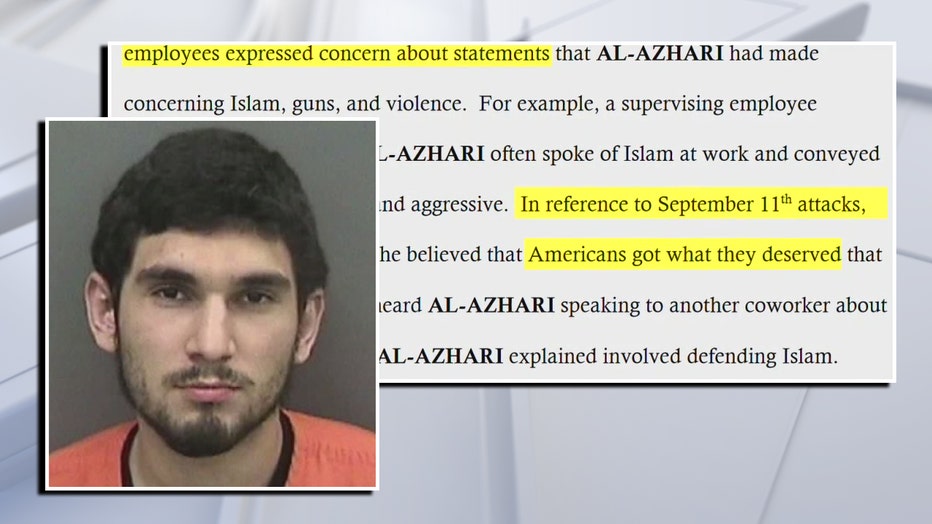 The defense says the aerial surveillance was unreasonable and violated al-Azhari’s privacy. His attorney is asking a judge to throw the evidence out.

Federal prosecutors argue the FBI did everything by the book. The two sides will battle it out in federal court in Tampa on Tuesday.