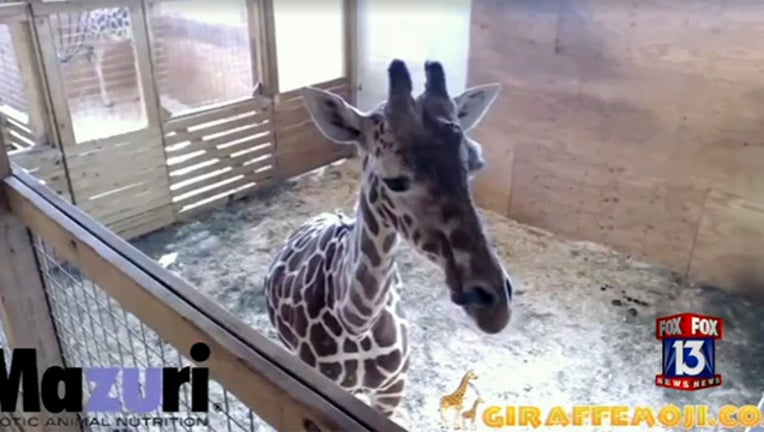 TAMPA (FOX 13) - April the giraffe may be the most famous expectant mother in America.  The sudden viral star is close to giving birth, her keepers say, but she is certainly keeping her fans waiting.

April became on overnight internet sensation last week when Animal Adventure Park in Harpursville, New York turned on a live video feed from her pen and announced that her baby's birth could come any time.

The park's Monday update explained that April is still not in active labor, but "mom and baby are happy and healthy."

Though April's water broke last week, park officials say that it is difficult to tell exactly when the birth will occur until the calf's hooves begin to show. At that point, it could be just 30 to 60 minutes until the baby arrives.

Liezel King, the collection manager of hoof and stock at the Phoenix Zoo, said a giraffe's birth is dramatic.

"Giraffe moms give birth standing up," King said. "So, that adds a little excitement to the process. You usually see the front feet first, and then the nose. Once it gets going, the mom gets the shoulders passed. Gravity sort of helps because they're standing."

April is 15 years old and her mate Oliver, who often makes appearances on the live feed, is 5 years old. Animal Adventure says this will be April's fourth calf and Oliver's first.

LINK: Watch the live stream on the park's YouTube channel

Did you know that giraffes are the tallest land animal in the world? They grow to an average height of 16 to 18 feet.

Newborns come out already standing at about 6 feet tall and can weigh about 150 pounds. Mothers typically give birth standing up.

Here are some other facts you might not know: