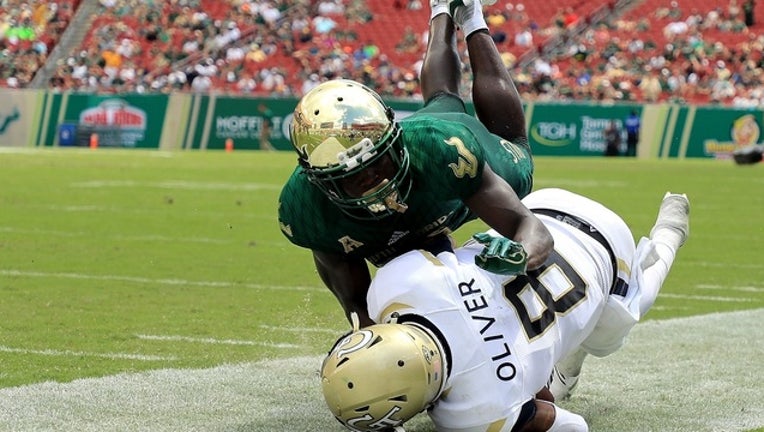 Tobias Oliver #8 of the Georgia Tech Yellow Jackets is tackled by Ronnie Hoggins #19 of the South Florida Bulls during a game at Raymond James Stadium on September 8, 2018 in Tampa, Florida. (Photo by Mike Ehrmann/Getty Images)

TAMPA, Fla. (AP) - Blake Barnett threw for a pair of touchdowns and ran for two more to help South Florida come from behind to beat Georgia Tech 49-38 on Saturday.

The Bulls (2-0) rallied from a 10-point, fourth-quarter deficit, drawing within 38-35 on Barnett's 3-yard TD pass to Terrence Horne and taking the lead for good on Barnett's 19-yard run with just over five minutes to go.

The graduate transfer who started Alabama's season opener before leaving the Crimson Tide in September 2016 put the game out of reach three minutes later with a 5-yard TD run setup by linebacker Tico Sawtelle's interception.

Horne also scored on first-quarter kickoff returns of 98 and 97 yards for USF, which continued an impressive stretch of success against Power 5 conference teams.

TaQuon Marshall and Tobias Oliver keyed a 419-yard rushing attack for Georgia Tech (1-1), which was driving with a chance to restore a 10-point lead before Qua Searcy fumbled inside the USF 15 and Sawtelle recovered the loose ball at the 12.

Barnett took over from there, leading an 88-yard drive that ended with the 10th lead change of the game.

The USF quarterback finished 21 of 31 passing for 202 yards with one interception. He also had a team-high 91 rushing on 16 attempts.

Marshall threw for 183 yards and one TD for Georgia Tech. He also scored on a 45-yard run while sharing playing time with backup Oliver, who finished three long second-half drives with scoring runs of 5, 1 and 1 yard.

The Yellow Jackets had three players with at least 95 yards rushing, with Marshall going for 113 on 13 carries and Oliver gaining 97 on 18 attempts.

USF has won six of its last seven games against Power 5 opponents, including bowl victories over South Carolina and Texas Tech. The lone loss over that stretch was 20-point home loss to Florida State in 2016.

Georgia Tech: Like USF, the Yellow Jackets didn't have a real good idea of where they stood after being barely tested in a 41-0 season-opening rout of Alcorn State. USF has one of the nation's most balanced offenses. The Bulls amassed 426 yards total offense Saturday, including 224 on the ground.

South Florida: After finishing the past two seasons ranked in the Top 25, the Bulls were hoping to show that their 23-4 record since the start of 2016 isn't a fluke and they're being built for long-term success.

There were five lead changes in the first quarter alone, with two of them coming on Horne's kickoff returns. Barnett's 18-yard TD pass to Darnell Salomon put USF up 21-17 at the half, despite Georgia Tech outgaining the Bulls 265 yards to 169 up to that point.