After the Senate voted to confirm Amy Coney Barrett to the Supreme Court 52-48, Barrett was sworn in by Justice Clarence Thomas in a ceremony on the South Lawn of the White House, capping off a rapid confirmation process ending just days before the 2020 presidential election.

"Upon administration of that oath, she will be able to begin to participate in the work of the Court," the Supreme Court said in a press release, adding that a "formal investiture ceremony will take place at a special sitting of the Court in the Courtroom at a later date." 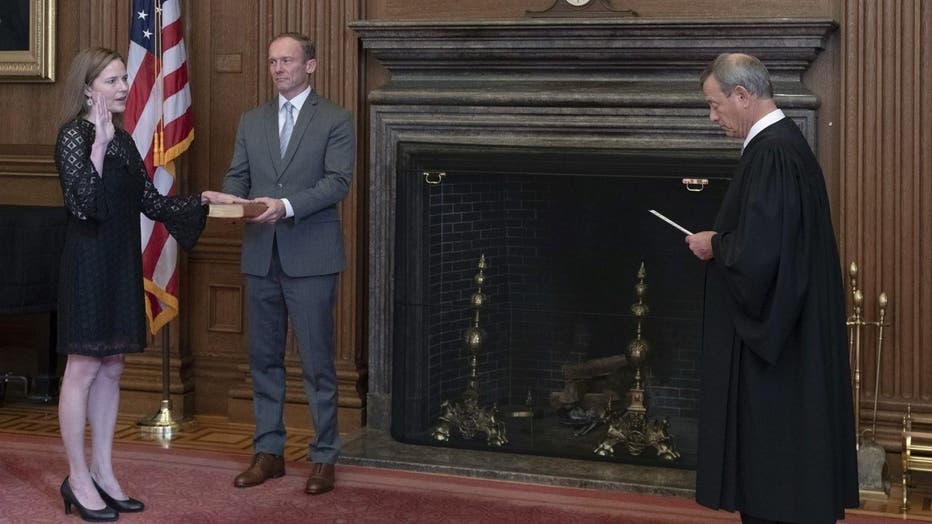 Barrett's confirmation process took place speedily following her nomination. After the Senate Judiciary Committee held a hearing and voted Thursday to advance her nomination to the Senate floor, Senate Republicans swiftly voted Sunday to limit debate on the matter before holding a confirmation vote Monday evening.

Following a 52-48 vote, Barrett then went before Justice Clarence Thomas to take her constitutional oath at a White House ceremony.

Barrett will now be able to sit with the other eight justices to rule on cases that include several high-profile issues. Republicans have requested that the Supreme Court speedily decide a case involving changes to Pennsylvania's election laws, after the court previously left in place a lower court decision that extended the deadline for ballots to be received for November's election.

With a Republican majority, Barrett was approved Monday night following a quick confirmation and over the objections of Democrats, who said her nomination was too close to the U.S. election in November.

One week after the election, the Supreme Court will hear oral arguments in a case where the fate of the Affordable Care Act could be decided. Democrats accused Republicans of rushing Barrett through her confirmation process so she could rule against the ACA, as she had previously criticized the 2012 decision that upheld it.

Barrett noted during her confirmation hearing that the issues involved in the current case are different from the 2012 one, and that she has not indicated which way she might lean in the new matter.