With a Republican majority, Barrett was approved Monday night following a quick confirmation and over the objections of Democrats, who said her nomination was too close to the U.S. election in November.

WASHINGTON - After the Senate voted to confirm Amy Coney Barrett to the Supreme Court 52-48, Barrett was sworn in by Justice Clarence Thomas in a ceremony on the South Lawn of the White House, capping off a rapid confirmation process ending just days before the 2020 presidential election.

“This is a momentous day for America,” Trump said before a crowd of about 200.

Barrett told those gathered that she learned through the “rigorous confirmation” that “it is the job of a judge to resist her policy preferences.” She vowed, “I will do my job without any fear or favor.”

Barrett will be able to participate in the court Tuesday after taking the judicial oath administered by Chief Justice John Roberts in a private ceremony at the court.

With a Republican majority in the Senate, Barrett was approved Monday night following a quick confirmation and over the objections of Democrats, who said her nomination was too close to the U.S. election in November.

After the Senate voted to confirm Amy Coney Barrett to the Supreme Court 52-48, Barrett was sworn in by Justice Clarence Thomas in a ceremony on the South Lawn of the White House, capping off a rapid confirmation process ending just days before the 2020 presidential election.

Vice President Mike Pence's office said Monday he would not preside at the Senate session unless his tie-breaking vote was needed after Democrats asked him to stay away when his aides tested positive for COVID-19. The vote was 52-48, and Pence's vote was not necessary.

The 48-year-old’s ascension to the Supreme Court tips the balance to a 6-3 conservative majority likely for years to come. Supreme Court Justice Clarence Thomas administered the official constitutional oath to Barrett Monday evening.“This is something to be really proud of and feel good about,” Senate Majority Leader Mitch McConnell said during a rare weekend session Sunday ahead of voting. He scoffed at the “apocalyptic” warnings from critics that the judicial branch was becoming mired in partisan politics and declared that "they won’t be able to do much about this for a long time to come.”

Only one Republican, Sen. Susan Collins, who is in a tight reelection fight in Maine, voted against the nominee — but not over any direct assessment of Barrett. Rather, Collins said, “I do not think it is fair nor consistent to have a Senate confirmation vote prior to the election.”

Republicans in the Senate had been pushing for a quick vote before the Nov. 3 election and ahead of the latest challenge to the Affordable Care Act, which the Supreme Court is set to hear on Nov. 10. Many questions from Democrats during the confirmation hearings centered on this topic, with fears that Barrett would be a vote to undo the “Obamacare” law — which provides more than 20 million Americans health insurance coverage.

The Senate voted to confirm Amy Coney Barrett to the Supreme Court in a 52-48 vote, capping off a rapid confirmation process held just days before the 2020 presidential election.

During testimony earlier this month, Barrett presented herself as a judge with deeply held religious beliefs, but vowed to approach each case with an “open mind.” A devout Catholic, the appellate judge promised to bring no personal agenda to the high court.

Barrett has remained neutral on many issues, asserting it's against judicial code to say whether she would overturn the Affordable Care Act or how she would vote on other politically fraught issues, including abortion.

Sen. Lindsey Graham, R-S.C., who presided over the confirmation hearings, said previously that Barrett’s nomination to the Supreme Court is a signal to young conservative women who oppose abortion that there’s “a seat at the table for them.”

“She’s going to the court,” Graham said Oct. 13. “This is the first time in American history that we’ve nominated a woman who’s unashamedly pro-life and embraces her faith without apology.”

Senators questioned Barrett’s views on racial equity and presidential power in a bid to determine how she would rule on cases. Democratic Sen. Dick Durbin of Illinois probed whether her strict adherence to originalism means a president could not “unilaterally deny the right to vote” based on race, noting restrictions on mail-in ballots being erected in several states before Nov. 3. 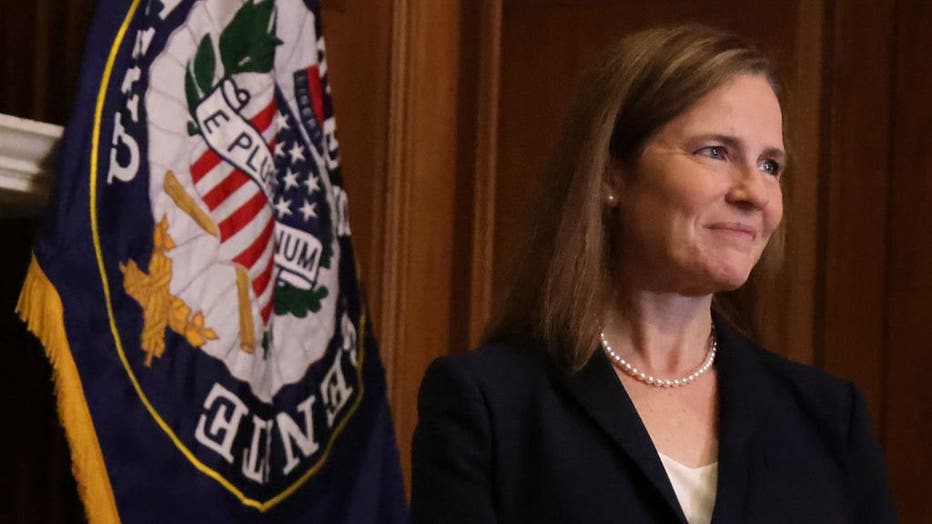 Barrett has said she is an "originalist" when it comes to interpreting the U.S. Constitution, indicating that she believes that the meaning of law does not change over time. She agreed there are "many laws" that protect the right to vote, including the 14th and 15th Amendments to the Constitution, but stopped short of a blanket statement: "I really can't say anything more," Barrett said.

Sen. Patrick Leahy, D-Vt., asked what she thinks of Trump's view that he can pardon himself. Barrett said during the confirmation hearings that a president's ability to pardon himself has never been tested in court and the question calls for “legal analysis.”

Amy Coney Barrett gave an opening statement Oct. 12, 2020 at the confirmation hearings for the Supreme Court.

Barrett told senators she can set aside her Catholic beliefs and has done that since her confirmation as an appeals court judge in 2017. She declined to say whether she would recuse herself from any election-related cases involving Trump.

“Judges can’t just wake up one day and say I have an agenda — I like guns, I hate guns, I like abortion, I hate abortion — and walk in like a royal queen and impose their will on the world,” Barrett told the Senate Judiciary Committee.