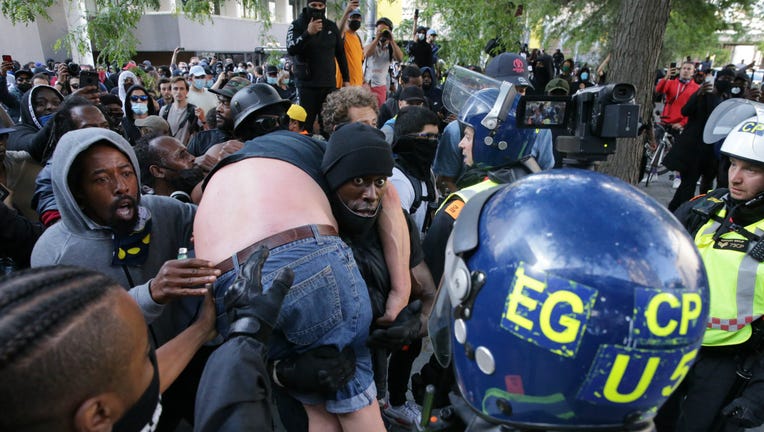 A group of men including Patrick Hutchinson (carrying the man) help an injured man away after he was allegedly attacked by some of the crowd of protesters as police try to intervene on the Southbank near Waterloo station on June 13, 2020 in London, U (Luke Dray/Getty Images)

A Black Lives Matter protester photographed carrying a white man – assumed to be a far-right counterprotester – to safety when demonstrations descended into violence in London Saturday said he chose to step up, rather than let the man be pummeled by the crowd, “to stop someone from being killed.”

Patrick Hutchinson, who is black, and four other Black Lives Matter protesters said they witnessed an altercation break out at the top of the stairs by the Southbank Centre, near the Waterloo Station.

The five men then surrounded the white man who had fallen to the ground, forming a barrier in the crowd to prevent him from being trampled. Hutchinson said he then “scooped him up into a fireman's carry and marched him out with the guys around me, protecting me and shielding me and protecting this guy from getting any further punishment."

"I wasn't thinking, I was just thinking of a human being on the floor. It wasn't going to end well had we not intervened,” Hutchinson told the BBC. “I had no other thoughts in my mind apart from getting to safety. We did what we had to do. We stopped somebody from being killed."

Hutchinson, a personal trainer from Wimbledon, said he chose to step up rather than resemble the three police officers in Minneapolis who failed to intervene while a fourth white officer, Derek Chauvin, knelt on George Floyd’s neck for nearly nine minutes before he died in police custody on May 25.

“It’s not black versus white, it’s everyone versus the racists,” Hutchinson said in a separate interview with Channel 4. “It was scary. But you don’t think about it at the time, you do what you’ve got to do.” 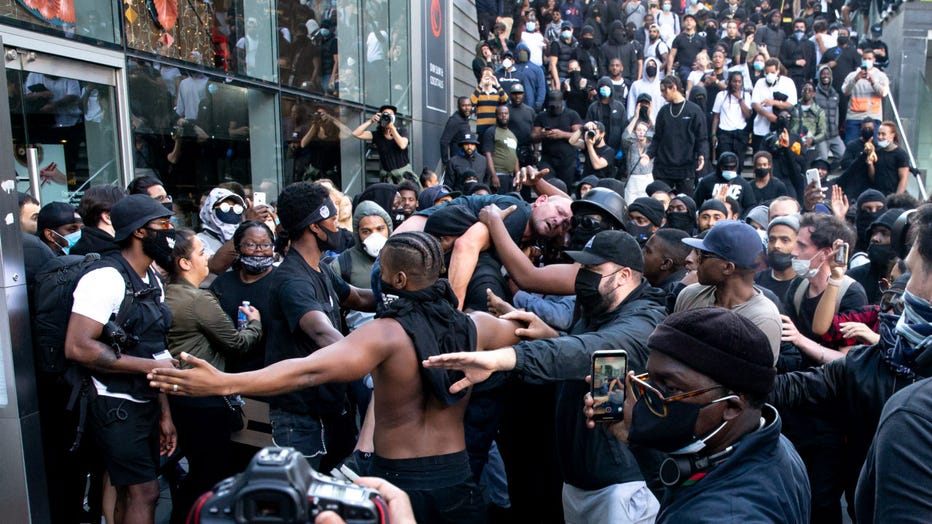 A group of men including Patrick Hutchinson (carrying the man) help an injured man away after he was allegedly attacked by some of the crowd of protesters on the Southbank near Waterloo station on June 13, 2020 in London, United Kingdom. Following a (Luke Dray/Getty Images)

“If the other three police officers that were standing around when George Floyd was murdered had thought about intervening, and stopping their colleague from doing what he was doing, like we did, George Floyd would be alive today,” he said.

“I just want equality, equality for all of us. At the moment, the scales are unfairly balanced and I just want things to be fair for my children and my grandchildren.”

After protests descended into violence Saturday, Claudia Webbe, the Labour MP for Leicester East, applauded Hutchinson as a “national hero,” writing “this is what humanity looks like.”

David Lammy, the Labour MP for Tottenham, also tweeted out Hutchinson’s photo and wrote: “It's easy to focus on the worst instincts of human behaviour. But it is vital we also celebrate the best.”

The group claimed they were there to protect historic statues, including that of Prime Minister Winston Churchill, which was vandalized a week before by someone who described him as “a racist.” 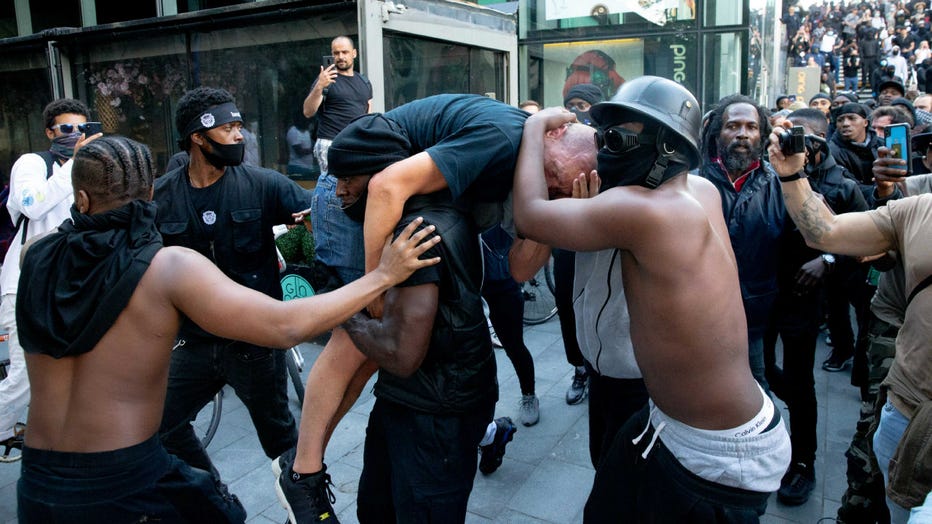 A group of men including Patrick Hutchinson (carrying the man) help an injured man away after he was allegedly attacked by some of the crowd of protesters on the Southbank near Waterloo station on June 13, 2020 in London, United Kingdom. Following a (Luke Dray/Getty Images)

But the counterprotesters clashed with both Black Lives Matter demonstrators and police in riot gear, pelting officers with bottles and cans and throwing a smoke canister, The Guardian reported.

Police said 113 people were arrested, including a 28-year-old man taken into custody after allegedly being photographed urinating on a memorial dedicated to Keith Palmer – a police officer killed by a terrorist trying to enter the Palace of Westminster in 2017.