Bob Dole, a Republican political icon from Kansas, died Sunday at the age of 98. Remembrances from fellow lawmakers, including President Joe Biden, began pouring in after news of his passing was made public by the Elizabeth Dole Foundation.

WASHINGTON - Sen. Bob Dole's casket will lie in state in the U.S. Capitol on Thursday as congressional leaders honor the former Republican presidential candidate and World War II veteran who served in Congress for 36 years.

Dole died Sunday at the age of 98. He was a leader known for his caustic wit, which he often turned on himself but didn’t hesitate to turn on others, too. He shaped tax and foreign policy and worked vigorously to help the disabled, enshrining protections against discrimination in employment, education and public services in the Americans with Disabilities Act.

The U.S. Capitol has been considered the most suitable place for the nation to pay final tribute to its most eminent citizens by having their remains lie in state. The commemoration will include a formal arrival and departure ceremony.

"Senator Dole was an extraordinary patriot, who devoted his entire life to serving our nation with dignity and integrity," said House Speaker Nancy Pelosi, D-Calif. 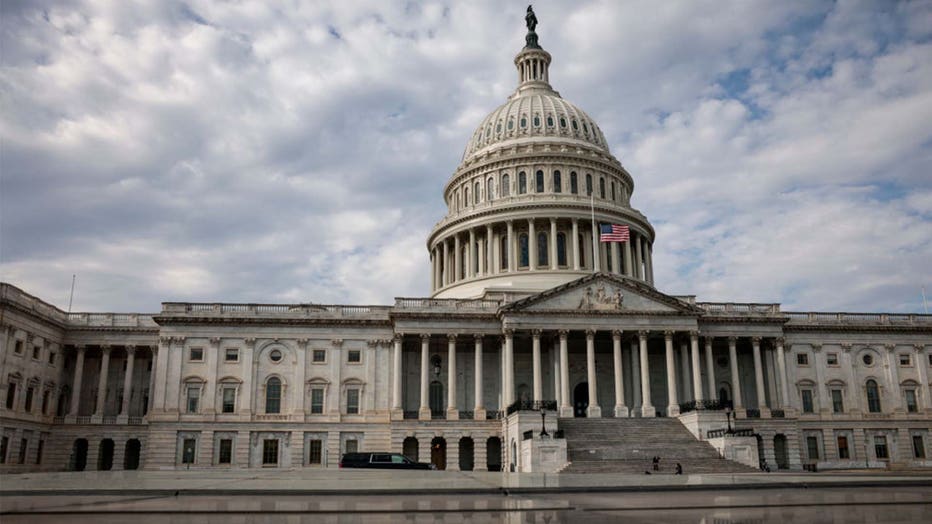 The American flag is flown at half-staff in honor of former Senator Bob Dole (R-KS) at the U.S. Capitol on Dec. 06, 2021 in Washington, DC.

RELATED: US leaders, veterans react to death of Bob Dole, 'an American statesman'

Dole, representing Kansas, served four terms in the House and more than four terms in the Senate. He won the Republican nomination in 1996, but was defeated when President Bill Clinton won a second term. He was also 1976 GOP vice presidential candidate on the losing ticket with President Gerald Ford.

"Those of us who were lucky to know Bob well ourselves admired him even more," said Sen. Mitch McConnell, the Republican leader in the Senate. "A bright light of patriotic good cheer burned all the way from Bob’s teenage combat heroics through his whole career in Washington and through the years since. We look forward to honoring his life and legacy at the Capitol."

Senate Majority Leader Chuck Schumer, D-N.Y., said he didn't get to serve with Dole, but "his reputation and his achievements, and most of all his character preceded him."

Dole received two Purple Hearts for his valor in World War II. Throughout his political career, he carried the mark of war. Charging a German position in northern Italy in 1945, Dole was hit by a shell fragment that crushed two vertebrae and paralyzed his arms and legs. The young Army platoon leader spent three years recovering in a hospital and never regained use of his right hand.