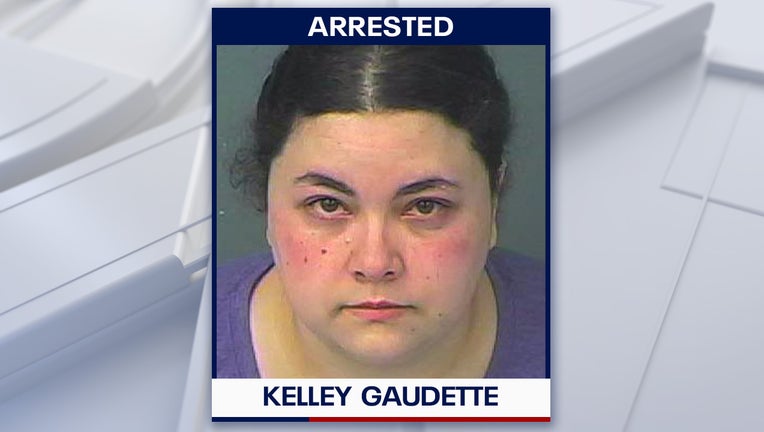 BROOKSVILLE, Fla. - Deputies say a Brooksville woman is accused of lewd and lascivious battery on a 15-year-old boy who ran away from his home in New York and came to Florida after they met in an online chat room for depression.

The Hernando County Sheriff's Office said the teen had last been seen in New York on May 24, 2020. The next day, the boy's mother said she got a text message from her son indicating he was in a gated community with the name of "Brooksville" or "Brookridge."

One of the teen's friends told police in New York that the boy had paid someone money to drive him to Florida to meet a woman he had met online. The friend said the woman was in her 30s with long brown hair and a 9-year-old child. Deputies later identified the woman as 32-year-old Kelley Gaudette.

On May 26, deputies found the missing teen at Gaudette's home in Brooksville.

Investigators said Gaudette initially denied knowing where the boy was, but eventually went into the house and had the teen come to the door to speak with the deputy.

That's when the deputy noticed the teen appeared to have hickeys, which the boy claimed were bruises from a barstool hitting him on his neck.

The teen told the sheriff's office that Gaudette had paid a friend to drive him from New York to Florida, and said she had purchased him a cell phone so they could communicate.

Investigators learned the teen had met Gaudette two months earlier in an online chatroom for depression, where the boy had said he was trying to get away from a verbally abusive family situation.

Gaudette claimed she thought the teen was considering self-harm, so she offered him a place to stay and paid a friend to drive him to Hernando County.

RELATED: Mom of 6 killed in road rage shooting while on anniversary vacation

The teen claimed he had permission from his mother to be in Florida, but his mom told deputies her son suffers from mental illness and did not have access to his medication.

The mother also said she knew her son had been chatting with an older woman and told him it was unacceptable.

The teen denied having a sexual relationship with Gaudette, who told deputies she thought of him as a son and denied any inappropriate contact.

Deputies removed the boy from Gaudette's home and ultimately reunited him with his mother.

Several weeks later, the teen's mom told deputies she found disturbing sexual messages between her son and Gaudette, indicating the two were in a romantic relationship.

In late July, the mother contacted investigators again about nude images she found of Gaudette on her son's thumb drive, and provided the evidence to law enforcement.

On March 5, 2021, Hernando County detectives received a recorded interview with the teen conducted by authorities in New York. The 15-year-old said Gaudette had sent him nude photos and videos of herself through an online app, and admitted that when he arrived in Florida, the two began a sexual relationship.

On March 29, detectives questioned Gaudette again, who continued to deny any inappropriate contact with the boy. When confronted with the evidence, the sheriff's office said Gaudette requested an attorney.

Deputies arrested Gaudette and charged her with lewd and lascivious battery on a victim older than 12 but less than 16 years of age, principle to traveling to meet a minor, unlawful use of a two-way communication device, and transmission of harmful materials to a minor using an electronic device.

Gaudette was then taken to the Hernando County Detention Center where her bond was set at $19,000.