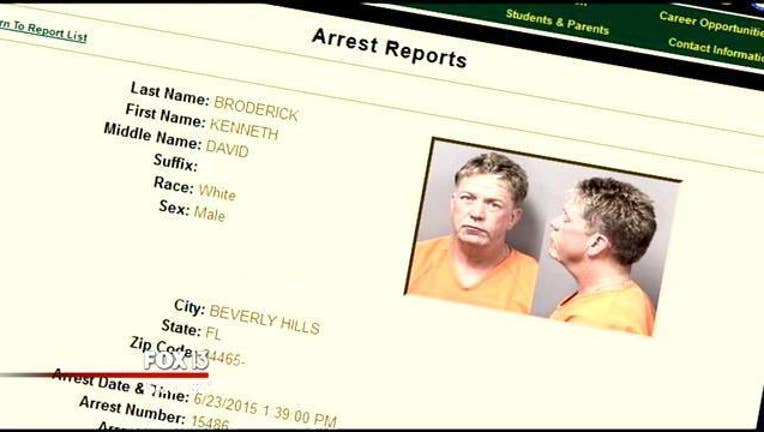 A Citrus County Transit driver is accused of being drunk while operating a public bus and hurting a passenger in the process, a court spokesperson said Thursday.

Tobey Phillips, a county spokesperson, said Kenneth Broderick was driving a para transit bus, used mostly by elderly and disabled passengers, and had one elderly passenger on board, strapped into his motorized scooter.

According to an arrest report, Broderick, 52, was driving east down State Road 44 when a Citrus County deputy pulled up behind him. Investigators said Broderick slammed on the brakes and pulled into a parking lot near South Arlene Avenue.

"The one passenger had lunged forward out of his scooter," Phillips said. "The passenger was transported to a local hospital and treated in the ER."

Phillips said Broderick had picked up the passenger from the passenger's home, taken him to Wal-Mart, and was on the way to drop off the elderly man at his house.

The responding deputy reported that Broderick smelled like alcohol and failed a field sobriety test. He was arrested and taken to jail, where his blood alcohol level registered a .255 and .261 -- more than three times the legal limit.

Investigators said Broderick had a bottle of vodka on him that was nearly empty.

"Shocking, given the driver," Phillips said. "He has been with us since 2009 as a transit driver. He has had above-average evaluations and he's been a good employee; no complaints have ever been filed."

Broderick, who told deputies he had not been drinking, was charged with driving under the influence. He was fired immediately from his county job.

FOX 13 stopped by Broderick's home, but no one answered the door.

According to Phillips, all county bus drivers have a commercial driver's license and pass several background checks, including state and federal ones. They also are required to take a drug test before being hired.