CRYSTAL RIVER, Fla. - It was one wild scene in Citrus County as a car was seen flying through the air. The driver narrowly avoided a horrific crash in Crystal River.

“It was one of those things you really can’t comprehend what’s happening because it was so bizarre,” said David Jones, a salesman with the Crystal Ford Lincoln Dealership.

Investigators said a man was driving down U.S. Highway 19 Tuesday afternoon when he got dizzy and drifted onto the shoulder. He managed to go nearly 500-feet through the dirt and grass, missing trees and concrete poles.

“There were no brake marks. It looks like he was actually on the gas the whole time when he hit that, so he had to be doing 70, 80, 90-miles an hour,” Sales Manager Bruce Azevedo said.

The man plowed into an embankment, coming inches from vehicles parked at the Crystal Ford Lincoln Dealership. The loud bang catching people’s attention as the car launched into the air and into the lot. Witnesses said the man’s car went airborne up to 20 feet, clearing about 12 vehicles, and landing 140 feet away. 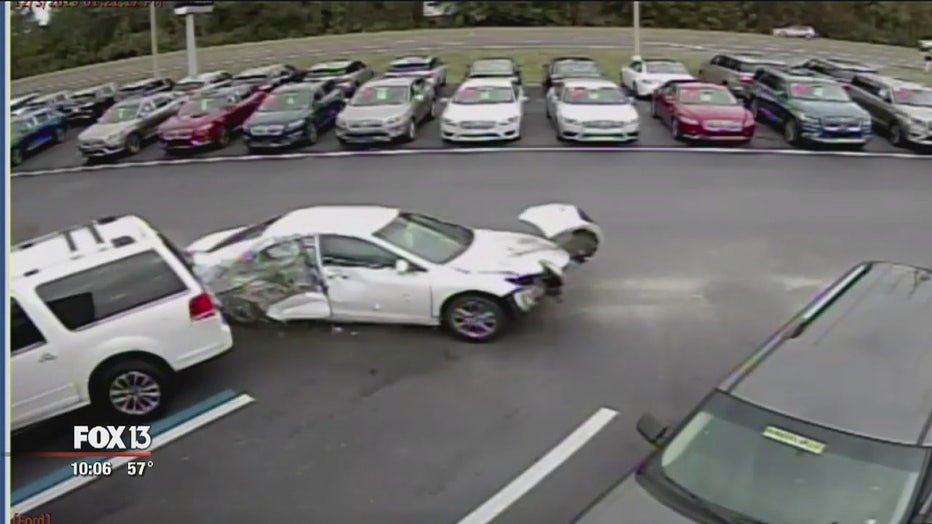 “I didn’t even move. I stood in the same spot," Jones said. "I was so shocked all the way until it crashed and came to a complete stop."

The Toyota Camry clipped a Lincoln Navigator near the showroom doors, tossing the large SUV out of its parking spot.

“And it spun his car around and slowed him down enough that he rolled backwards into a Ford Flex that we had over there which stopped him,” explained Azevedo.

In all, four cars on the lot were damaged. The man’s car was mangled and totaled.

Witnesses know how easily this wild wreck could have become a tragedy.

“It was a Christmas miracle. For it to happen with that amount of people and nobody to get hurt seriously,” Azevedo said.

He said the driver was not wearing a seatbelt and was taken to a local hospital. No word on the extent of his injuries. 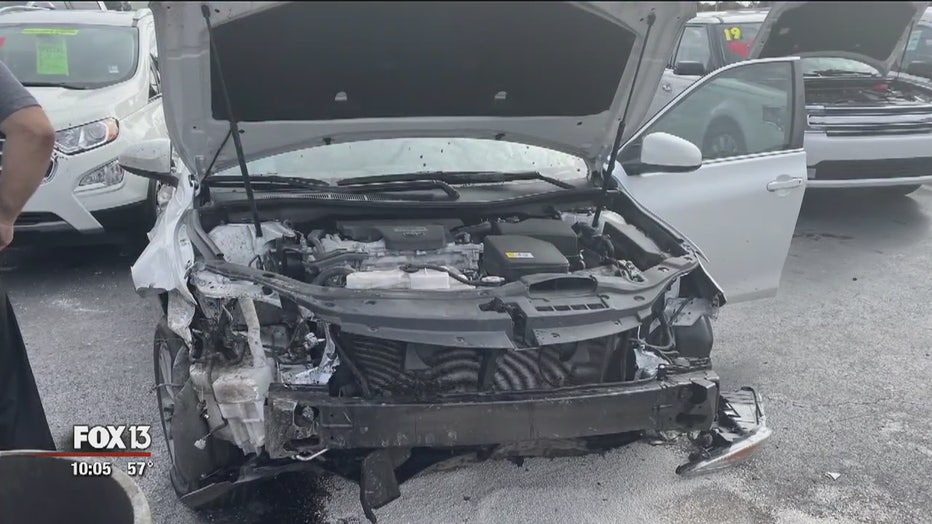 In the security footage, you can see one employee changing a license plate came just feet from being struck. Workers said the crash happened at the busiest time of day, with 15 to 20 customers and workers at the dealership.

Managers said they don’t want the embankment to become a launching pad ever again, so they plan to make sure a vehicle is kept right on the corner.