TAMPA, Fla. - Adam Labadie lost his job in the wake of the pandemic, so he spent the last five-months launching a new business and building a machine to sanitize shopping carts. His invention has now caught the attention of major grocery chains.

Shopping carts are touched a lot. Hundreds of people grab those handles, spreading germs and bacteria.

Since the pandemic hit, cleaning carts has become a full-time job at grocery stores. Labadie thinks it can be done better.

The Tampa man invented a machine he says will make shopping safer and cut down on waste.

“What I consider a long-term sustainable solution for grocery cart sanitation,” said Labadie.

It is called the Arch Cart Sanitizer and acts like a car-wash for shopping carts. Workers push the nested carts through the arch and with the click of a remote, the entire thing is sprayed with an EPA approved, water-based sanitizer that is proven to kill COVID-19. 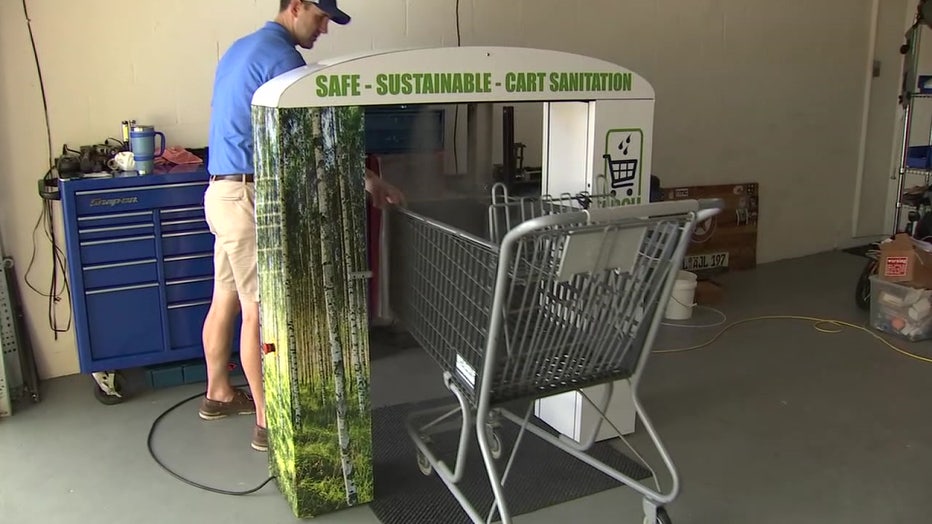 The unit Labadie shows potential customers is a prototype. He says the final design will be in production soon. His goal was to create something easy to use and highly effective.

“Be sustainable, user friendly; be able to hold up to the sun, hold up to carts, so there was a lot that went into it,” Labadie said.

He even considered cost, telling FOX 13 grocers can disinfect using the arch for less than a penny per cart.

The machine also eliminates the need for additional cleaning supplies and single-use wipes.

An estimated 2.6-billion disposable wipes end up in the landfill every single year. Labadie says those dirty facts about disposable wipes are what initially inspired him to sketch the design about six years ago.

Now he is in talks with chains to make his invention a reality.

“Some of the largest grocers in the world have reached out to me, had a call from the Philippines today,” Labadie said.

Learn more about the Arch Cart Sanitizer at https://archclean.com/