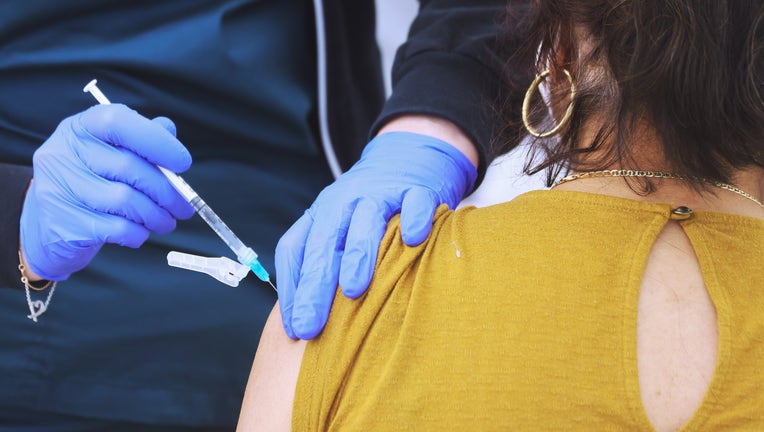 ATLANTA - The Centers for Disease Control and Prevention reported Tuesday that one in four Americans have received at least one dose of the COVID-19 vaccine, a critical milestone in the fight to get the country vaccinated.

President Biden remarks on 100M vaccinated ahead of schedule

President Joe Biden gave his remarks on 100 million people who have been vaccinated ahead of schedule, but stressed we still have a long way to go.

The vaccine rollout has picked up the pace ever since the first dose of vaccine in the U.S. was given on Dec. 14, 2020 in New York to an intensive care nurse.

The country now has three vaccines in its stockpile from Pfizer-BionNTech, Moderna and Johnson & Johnson that have been approved for emergency use by the U.S. Food and Drug Administration. AstraZeneca, a fourth company, hopes to have its vaccine greenlighted by the FDA by April.

On March 19, the U.S. cleared President Joe Biden’s goal of injecting 100 million coronavirus shots more than a month before his target date of his 100th day in office.

With the nation now administering about 2.5 million shots per day, Biden, who promised to set a new goal for vaccinations, teased the possibility of setting a 200 million dose goal by his 100th day in office.

Despite the vaccination rollout, health officials are still concerned that the efforts are competing with the rise in COVID-19 variants.

"The way we can counter [U.K. variant] 1.1.7, which is a growing threat in our country, is to do two things: to get as many people vaccinated as quickly and as expeditiously as possible with the vaccine that we know works against this variant and, finally, to implement the public health measures that we talk about all the time ... masking, physical distancing and avoiding congregant settings, particularly indoors," the government’s top infectious disease expert Dr. Anthony Fauci said last week.

RELATED: New York expands COVID vaccine eligibility to everyone over 50

The head of the CDC, Dr. Rochelle Walensky, urgently warned state officials and ordinary Americans not to let down their guard, previously saying she is "really worried about reports that more states are rolling back the exact public health measures that we have recommended."

Walensky’s comments came as more states lifted restrictions. Iowa, Texas, Mississippi, North Dakota and Texas lifted their mask mandates in recent months. Arkansas Gov. Asa Hutchinson said Sunday that he believes his proposal to remove a mask mandate intended to slow the spread of the coronavirus will take place as planned at the end of the month.