INVERNESS, Fla. - A Citrus County woman is devastated that someone appears to have taken the specially-made memorial cross from the site where her daughter was killed in a car crash.

She doesn't know who has it or why anyone would want to take it, but she's pleading for them to return it, no questions asked.

Almost a year ago, Michelle Anderson lost her daughter, Leilani. Now, she's feeling the pain of loss all over again.

"No parent can ever get over the loss of a child," Anderson said. "It's like tearing a piece of my heart out, not having it there...Makes you wonder what kind of people are out there to do something like this."

April 15, 2020, 17-year-old Leilani Anderson was killed in a crash on East Stage Coach Trail, west of Brittle Road in Citrus County. She was the passenger. The driver, 18-year-old Franklin Delano Cooper, was also killed after Florida Highway Patrol says he lost control. 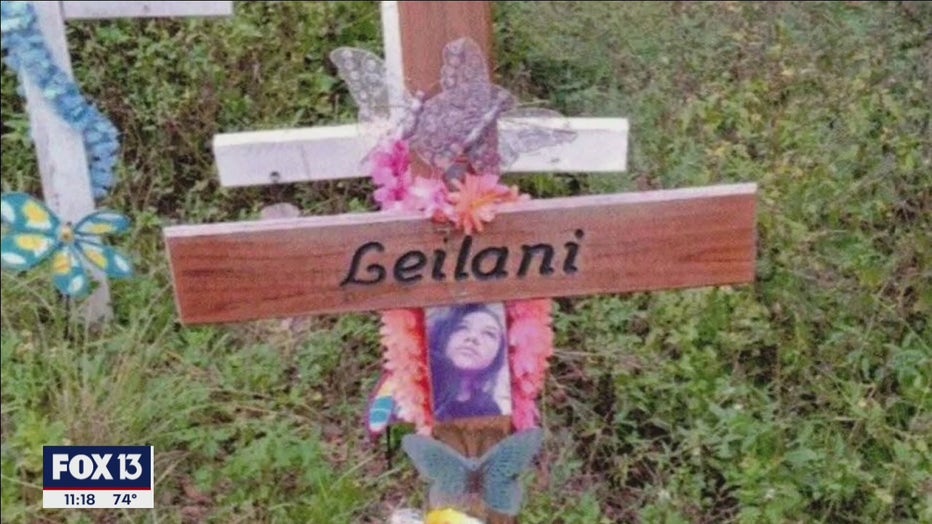 "I have something that I can see my daughter by," Anderson said, "so that when I drive by, I know she's there, it's OK."

Anderson honks each time she drives past. But last week, the cross wasn't there.

"I slam on the brakes, pull off the side of the road," Anderson recalled. "It wasn't in the ditch, it wasn't behind the trees, it wasn't where the accident site was, it wasn't across the street, so I became very hysterical and immediately started crying."

She filed a report with the Citrus County Sheriff's Office. Citrus County public information officer Veronica Kampschroer confirms that the road maintenance staff did not remove it.

"Coming home from school I got the call from my mom that someone took the cross and it broke me, I broke down on the bus," said 12-year-old Avery Sanchez, Leilani's sister.

"We all miss her," said Jacob Sanchez, Leilani's 7-year-old brother.

As the one-year anniversary of the crash gets closer, Michelle Anderson hopes whoever broke their hearts a second time has a change in theirs.

"I'm not asking for anything but for it to be returned," Anderson said. "I don't care if you took it. I don't even care why you took it. I just want it back."

Anyone with information on the missing memorial cross can call the Citrus County Sheriff's Office non-emergency line at 352-249-2790.