A 6-year-old girl is alive thanks to a daring rescue by an onlooker and revival efforts by authorities. (Source: KDVR/FOX Edge)

DENVER - A 6-year-old girl was in serious condition after she and two other kids fell into an icy pond at an apartment complex. But thanks to a daring rescue by an onlooker and revival efforts by authorities, the girl survived.

The girl wasn’t breathing when Arapahoe County deputies and South Metro paramedics arrived at the complex on Jan. 9. But they administered CPR until she could breathe on her own again.

The sheriff’s office released body camera footage showing a crew administering chest compressions and encouraging the girl to keep fighting. Once she started breathing, authorities rushed her to an ambulance and took her to a hospital for treatment. 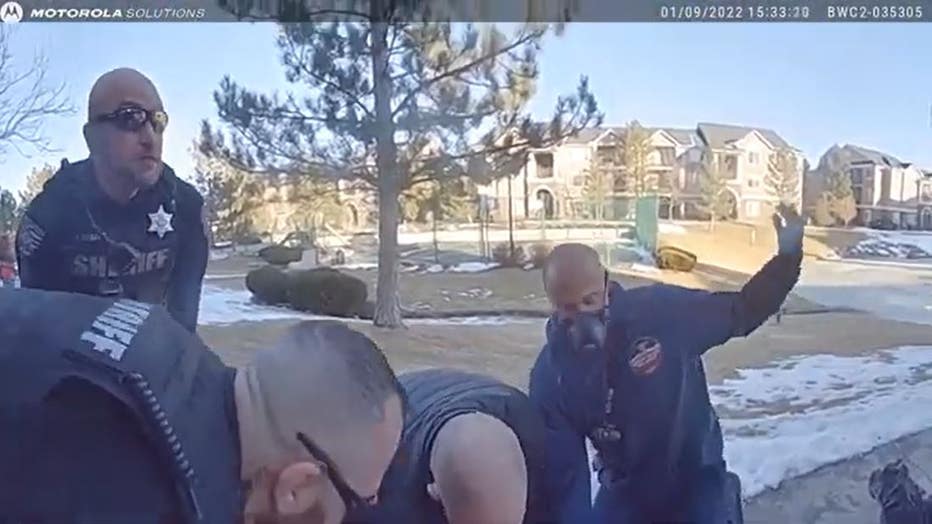 Paramedics and deputies administered CPR to a 6-year-old Colorado girl who had fallen into an icy pond. (Source: Arapahoe County Sheriff’s Office via Storyful)

"I have kids of my own. I have an 8-year-old. And, you know, the whole time I was there, I was just kind of, you know, I didn't want somebody to lose their daughter," Deputy Blaine Moulton said during a news conference.

Authorities said the girl was one of five kids playing on the ice when three of them fell through the ice and into the pond. A witness, later identified as 23-year-old Dusti Talavera, sprang into action, saving the first two children.

"Before I even realized it, I was out there in the pond pulling two kids out," Talavera told KDVR. "And that’s when I fell in."

Talavera said a teenage boy saw what happened and threw them a rope, eventually pulling her and the girl from the pond.
Cory Sutton of South Metro Fire Rescue praised Talavera for running to the kids’ rescue.

"We were back at the fire station talking about how brave she was, how great the officers did," Sutton said. "And gosh, I hope if this happened to one of mine that somebody like her was close by."