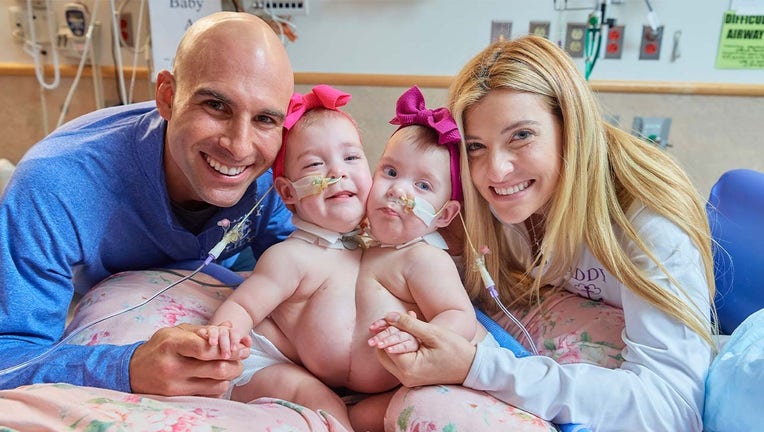 Addy and Lily Altobelli, born connected at the chest, are back home with their family after CHOP doctors successfully separated them late last year. ((Children's Hospital of Philadelphia))

PHILADELPHIA - Addison and Lilianna Altobelli are finally home and resting in Chicago after surgeons at the Children's Hospital of Philadelphia successfully separated the conjoined twins late last year.

Addy and Lily spent nearly a year in intensive care at CHOP after they were born connected at the abdomen and chest – a condition known as thoraco-omphalopagus.

They shared a liver, diaphragm, chest, and abdominal wall.

Addy and Lily were diagnosed prenatally, when parents Maggie and Dom went for their 20-week ultrasound appointment. At that time, Maggie and Dom assumed they were having one baby – until the ultrasound images showed two fetuses attached at the abdomen.

They couple was referred to CHOP for further evaluation. There, after further testing, doctors determined that, once born, the girls would be excellent candidates for separation due to the size of their shared liver and them each having their own healthy hearts.

"To see them with their own bodies – their bodies were just so perfect – it was amazing," Maggie said after the surgery. "It was just indescribable."

In December, the twins finally flew home to Chicago. There they spent two more weeks at Lurie Children's Hospital.

Both girls still have tracheostomy tubes to help with their breathing, but doctors say they will eventually adjust to breathing on their own.

CHOP has separated 28 pairs of conjoined twins since 1957, the most of any hospital in the country.
___