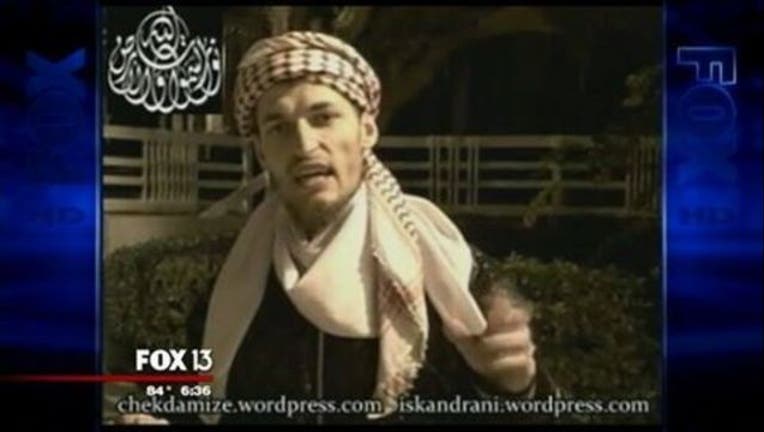 TALLAHASSEE (NSF) - A federal appeals court Friday upheld the conviction and 40-year prison sentence of a man convicted in a plot to carry out terror attacks in the Tampa Bay area as “payback” for the death of Osama bin Laden.

The 11th U.S. Circuit Court of Appeals rejected arguments by a lawyer for Sami Osmakac, who was arrested in January 2012 in a hotel parking lot after loading a car bomb --- non-functional because it was supplied by an undercover FBI agent --- into the trunk of a vehicle. Before the arrest, Osmakac also had made a “martyrdom” video in a hotel room.

“Osmakac said (in the video) that the attack was `payback' for killing Osama bin Laden,” said Friday's 44-page main opinion, written by appeals-court Judge Frank Hull and joined fully by Judge Stanley Marcus. “Osmakac also said that he was coming for American blood, that he had led a life of terrorizing non-Muslims, and that other Muslims needed to `wake up.' “

Osmakac, a naturalized U.S. citizen who was born in what is now Kosovo, began drawing attention from the FBI as early as 2010 because of what Friday's ruling described as a “commitment to Islamic extremism.” The FBI recorded numerous conversations involving Osmakac from November 2011 to January 2012 and used a confidential source, along with the undercover agent.

During the investigation, Osmakac discussed potential targets such as a gay nightclub, Tampa Bay bridges and the Seminole Hard Rock Hotel & Casino, according to the ruling. Along with supplying the car bomb, the undercover agent also provided non-functional grenades, an AK-47 automatic rifle and a suicide vest.

A jury in June 2014 found Osmakac guilty of committing one count of attempting to use weapons of mass destruction and one count of possessing an unregistered firearm. A U.S. District Court judge later sentenced him to 40 years in prison.

The appeal focused, in part, on whether Osmakac had been improperly denied access to materials related to the FBI surveillance. Authorities received approval for the surveillance under a law known as the Foreign Intelligence Surveillance Act, or FISA.

Under the law, authorities submit applications to a FISA court to receive approval for conducting surveillance or searches. Prosecutors did not provide some FISA materials to Osmakac's attorney because the documents contained classified information, Friday's ruling said.

The appeals court said it reviewed the materials and concluded that the issue was handled properly.

“After that careful and thorough review, we readily find that all of the FISA statutory requirements are satisfied, that the FISA-derived evidence in this case was legally acquired, and that the FISA surveillance and searches were made in conformity with the FISA court's order of authorization and approval,” the ruling said. “The FISA materials are very clear and well-organized, and disclosing them to Osmakac is not `necessary' to assess the legality of the searches or surveillance.”