BRANDON, Fla. - When the massive power of a hurricane whips through, underground power lines could keep the lights on.

"This year we are installing about 80 miles of power lines in the ground and next year that will grow to 100 miles," said Cherie Jacobs, Tampa Electric spokesperson.

On this day, contractors in Brandon installed the underground conduit to carry power lines to Tampa Electric customers. The workers contend with the water table and maneuver around gas and water lines already in the ground.

Virtually every power company in Florida is putting lines in the ground.

"When the power goes out, it puts people’s lives at risk and it really puts a crimp in our economy," said State Rep. Randy Fine, a Republican from Palm Bay. "So spending this money is going to have a massive return on investment both for health as well as the economy."

Some estimates say massive power outages, as Florida saw with Hurricane Irma, can cost $1 billion a day, not to mention the health and safety risks.

The Florida Legislature passed a bill in 2019 requiring power companies to put lines underground. Opponents warned it will drive up power bills. 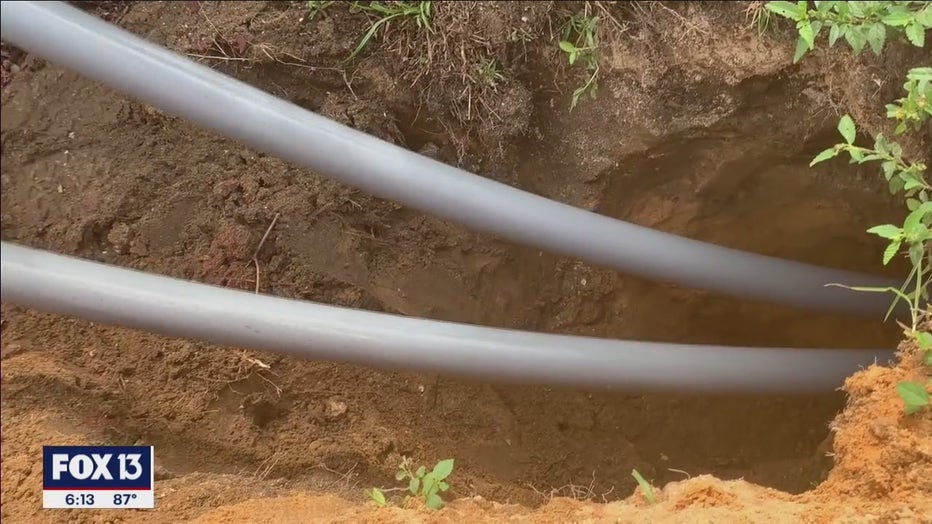 It’s not easy or fast. Burying power lines can cost as much as $600,000 to $1 million a mile, according to industry estimates.

So far, local power companies in the Tampa Bay area say they’ve buried from 35 to 45 percent of their lines. They have a process for choosing where to bury them next, based on a number of factors.

"Things like what wind zone it is in, what flood zone it is in, how the tree canopy is in the area, what the age of the equipment is, and how did that equipment fare in previous severe weather,"  Jacobs explained.

There are drawbacks. When something does go wrong with underground lines, they have to dig up the earth to fix them.