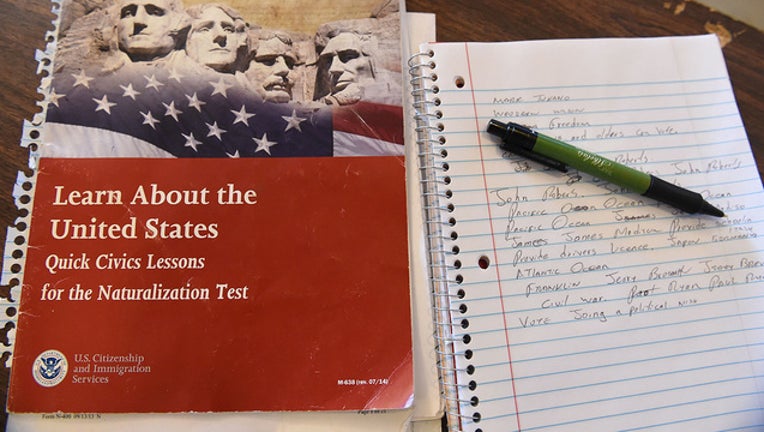 The English test includes separate speaking, writing, and reading components to make sure the applicant can understand the language.

Then, each applicant must also pass a civics test in which they are given 10 of the following 100 questions. They must get at least six correct to pass.

Here's the full test, straight from the U.S. Citizenship and Immigration Services.

The 100 civics (history and government) questions and answers for the naturalization test are listed below. The civics testis an oral test and the USCIS Officer will ask the applicant up to 10 of the 100 civics questions. An applicant must answer 6 out of 10 questions correctly to pass the civics portion of the naturalization test. On the naturalization test, some answers may change because of elections or appointments. As you study for the test, make sure that you know the most current answers to these questions. Answer these questions with the name of the official who is serving at the time of your eligibility interview with USCIS. The USCIS Officer will not accept an incorrect answer. Although USCIS is aware that there may be additional correct answers to the 100 civics questions, applicants are encouraged to respond to the civics questions using the answers provided below.

* If you are 65 years old or older and have been a legal permanent resident of the United States for 20 or more years, you may study just the questions that have been marked with an asterisk.

A: Principles of American Democracy

1. What is the supreme law of the land?
▪ the Constitution

3. The idea of self-government is in the first three words of the Constitution. What are these words?
▪ We the People

5. What do we call the first ten amendments to the Constitution?
▪ the Bill of Rights

6. What is one right or freedom from the First Amendment?*
▪ speech
▪ religion
▪ assembly
▪ press
▪ petition the government

7. How many amendments does the Constitution have?
▪ twenty-seven (27)

9. What are two rights in the Declaration of Independence?
▪ life
▪ liberty
▪ pursuit of happiness

10. What is freedom of religion?
▪ You can practice any religion, or not practice a religion.

11. What is the economic system in the United States?*
▪ capitalist economy
▪ market economy

B: System of Government

13. Name one branch or part of the government.*
▪ Congress
▪ legislative
▪ President
▪ executive
▪ the courts
▪ judicial

14. What stops one branch of government from becoming too powerful?
▪ checks and balances
▪ separation of powers

15. Who is in charge of the executive branch?
▪ the President

17. What are the two parts of the U.S. Congress?*
▪ the Senate and House (of Representatives)

20. Who is one of your state's U.S. Senators now?*
▪ Answers will vary. [District of Columbia residents and residents of U.S. territories should answer that D.C.
(or the territory where the applicant lives) has no U.S. Senators.]

21. The House of Representatives has how many voting members?
▪ four hundred thirty-five (435)

23. Name your U.S. Representative.
▪ Answers will vary. [Residents of territories with nonvoting Delegates or Resident Commissioners may
provide the name of that Delegate or Commissioner. Also, acceptable is any statement that the territory has no (voting) Representatives in Congress.]

24. Who does a U.S. Senator represent?
▪ all people of the state

27. In what month do we vote for President?*
▪ November

30. If the President can no longer serve, who becomes President?
▪ the Vice President

31. If both the President and the Vice President can no longer serve, who becomes President?
▪ the Speaker of the House

32. Who is the Commander in Chief of the military?
▪ the President

33. Who signs bills to become laws?
▪ the President

34. Who vetoes bills?
▪ the President

37. What does the judicial branch do?
▪ reviews laws
▪ explains laws
▪ resolves disputes (disagreements)
▪ decides if a law goes against the Constitution

38. What is the highest court in the United States?
▪ the Supreme Court

42. Under our Constitution, some powers belong to the states. What is one power of the states?
▪ provide schooling and education
▪ provide protection (police)
▪ provide safety (fire departments)
▪ give a driver's license
▪ approve zoning and land use

43. Who is the Governor of your state now?
▪ Answers will vary. [District of Columbia residents should answer that D.C. does not have a Governor.]

44. What is the capital of your state?*
▪ Answers will vary. [District of Columbia residents should answer that D.C. is not a state and does not have a capital. Residents of U.S. territories should name the capital of the territory.]

45. What are the two major political parties in the United States?*
▪ Democratic and Republican

48. There are four amendments to the Constitution about who can vote. Describe one of them.
▪ Citizens eighteen (18) and older (can vote).
▪ You don't have to pay (a poll tax) to vote.
▪ Any citizen can vote. (Women and men can vote.)
▪ A male citizen of any race (can vote).

49. What is one responsibility that is only for United States citizens?*
▪ serve on a jury
▪ vote in a federal election

50. Name one right only for United States citizens.
▪ vote in a federal election
▪ run for federal office

52. What do we show loyalty to when we say the Pledge of Allegiance?
▪ the United States
▪ the flag

55. What are two ways that Americans can participate in their democracy?
▪ vote
▪ join a political party
▪ help with a campaign
▪ join a civic group
▪ join a community group
▪ give an elected official your opinion on an issue
▪ call Senators and Representatives
▪ publicly support or oppose an issue or policy
▪ run for office
▪ write to a newspaper

A: Colonial Period and Independence

59. Who lived in America before the Europeans arrived?
▪ American Indians
▪ Native Americans

60. What group of people was taken to America and sold as slaves?
▪ Africans
▪ people from Africa

61. Why did the colonists fight the British?
▪ because of high taxes (taxation without representation)
▪ because the British army stayed in their houses (boarding, quartering)
▪ because they didn't have self-government

62. Who wrote the Declaration of Independence?
▪ (Thomas) Jefferson

67. The Federalist Papers supported the passage of the U.S. Constitution. Name one of the writers.
▪ (James) Madison
▪ (Alexander) Hamilton
▪ (John) Jay
▪ Publius

68. What is one thing Benjamin Franklin is famous for?
▪ U.S. diplomat
▪ oldest member of the Constitutional Convention
▪ first Postmaster General of the United States
▪ writer of "Poor Richard's Almanac"
▪ started the first free libraries

70. Who was the first President?*
▪ (George) Washington

71. What territory did the United States buy from France in 1803?
▪ the Louisiana Territory
▪ Louisiana

75. What was one important thing that Abraham Lincoln did?*
▪ freed the slaves (Emancipation Proclamation)
▪ saved (or preserved) the Union
▪ led the United States during the Civil War

▪ freed slaves in most Southern states

79. Who was President during World War I?
▪ (Woodrow) Wilson

80. Who was President during the Great Depression and World War II?
▪ (Franklin) Roosevelt

81. Who did the United States fight in World War II?
▪ Japan, Germany, and Italy

82. Before he was President, Eisenhower was a general. What war was he in?
▪ World War II

83. During the Cold War, what was the main concern of the United States?
▪ Communism

85. What did Martin Luther King, Jr. do?*
▪ fought for civil rights
▪ worked for equality for all Americans

88. Name one of the two longest rivers in the United States.
▪ Missouri (River)
▪ Mississippi (River)

89. What ocean is on the West Coast of the United States?
▪ Pacific (Ocean)

90. What ocean is on the East Coast of the United States?
▪ Atlantic (Ocean)

95. Where is the Statue of Liberty?*
▪ New York (Harbor)
▪ Liberty Island
[Also acceptable are New Jersey, near New York City, and on the Hudson (River).]

98. What is the name of the national anthem?
▪ The Star-Spangled Banner