Herd immunity doesn’t make any one person immune, and outbreaks can still pop up.

A Norwegian climber became the first to be tested for COVID-19 in Mount Everest base camp and was flown by helicopter to Kathmandu, where he was hospitalized.

Erlend Ness told The Associated Press in a message Friday that he tested positive on April 15. He said another test on Thursday was negative and he was now staying with a local family in Nepal.

An ace mountain guide, Austrian Lukas Furtenbach, warned that the virus could spread among the hundreds of other climbers, guides and helpers who are now camped on the base of Everest if all of them are not checked immediately and safety measures are taken.

Any outbreak could prematurely end the climbing season, just ahead of a window of good weather in May, he said.

"We would need now most urgently mass testing in base camp, with everyone tested and every team being isolated, no contact between teams," said Furtenbach. "That needs to be done now, otherwise it is too late."

Furtenbach, leading a team of 18 climbers to Mount Everest and its sister peak Mount Lhotse, said there could be more than just one case on the mountain as the Norwegian had lived with several others for weeks.

A Nepalese mountaineering official denied there were any active cases on the mountains at the moment. 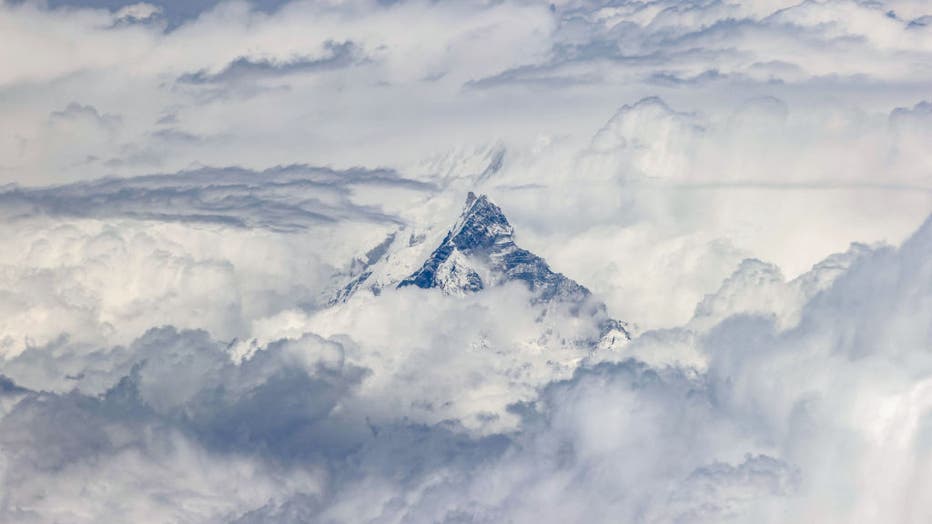 An aerial view taken from a commercial plane shows Himalayas and surrounding landscape, on April 27, 2021.

Mira Acharya, director at the Department of Mountaineering, said she had no official information about the COVID-19 cases and only reports of illnesses like pneumonia and altitude sickness.

Mountaineering was closed last year due to the pandemic and climbers returned to Everest this year for the first time since May 2019.

The popular spring climbing season in Nepal, which has eight of the highest peaks in the world, began in March and ends in May.

Meanwhile, China has opened Everest's northern slope to a few dozen mountaineers who will be tested for the coronavirus and must keep their distance while ascending the world's highest peak.

Both Nepal and China closed the mountain to foreign climbers last year because of the pandemic. Nepal has allowed in foreign climbers this season despite a surging COVID-19 outbreak, and at least one climber, a Norwegian, confirmed last month he had contracted the virus.

Nepal mountaineering officials have denied any outbreak on the mountain, citing only altitude sickness and other ailments common in the cold, harsh, low-oxygen environment where climbers stay in close quarters. This week, the Himalayan nation halted all flights as part of a strict lockdown of its capital and major cities amid its recent surge.

In contrast, China, where COVID-19 first emerged, has now largely contained domestic transmission of the virus, but it has maintained restrictions such as health checks and is on guard against imported cases.

The 38 people who were issued Chinese permits to climb the peak, known as Qomolongma in Tibetan, must come from parts of China that are at low risk for infection and must show a clean bill of health before attempting the summit, state media reported Friday.

They must undergo temperature checks regularly, use bottled oxygen and stay 4 meters (13 feet) from other climbers at the summit. They will be provided masks, thermometers and disinfectant.

Climbing schedules from the south side of the mountain, which is in Nepal, will be consulted so packs of climbers don't meet, said Nyima Tsering, head of the bureau overseeing Chinese climbing operations. People not registered to climb on the Chinese side are strictly barred from that side.

Last year, China used the break in climbing to haul some 6 tons of garbage off the mountain that has attracted ever-larger groups of climbers enabled by commercial mountaineering companies.

In 2019, 362 people climbed Everest from the north side, 241 of whom made it to the summit. Slightly more climbed from Nepal, where the sale of mountaineering permits and trekking and mountaineering jobs are major drivers of the local economy.