More than 1,000 soldiers, firefighters and police have joined rescue efforts after a giant mudslide ripped through a resort town southwest of Tokyo, (Credit: @dekophotodiary via Storyful)

ATAMI, Japan (AP) - More than 1,000 soldiers, firefighters and police on Sunday waded through a giant mudslide that ripped through a Japanese resort town southwest of Tokyo a day earlier, killing at least two people and leaving about 20 missing as it swept away houses and cars.

Prime Minister Yoshihide Suga told reporters 19 people had been rescued, and 130 homes and other buildings were damaged in Atami.

Two people were dead but more were feared missing, he said, speaking after an emergency Cabinet meeting. Earlier, disaster officials said about 20 were unaccounted for, but warned the number may rise. Shizuoka prefecture officials said three people had been injured.

"The area is still having heavy rainfall, but arduous rescue efforts will continue," Suga said, warning residents to watch out for more landslides. "Please act as quickly as you can to stay safe."

Troops, firefighters and other rescue workers, backed by three coast guard ships, were working to clear the mud from the streets of Atami and reach those believed to be trapped or carried away. The rescue workers were barely visible in the rainfall and thick fog except for the their hard hats. Six military drones were being flown to help in the search.

Shizuoka Gov. Heita Kawakatsu told a news conference Sunday that land development upstream from the affected area may have played a role in the disaster. Citing preliminary drone examination, Kawakatsu said massive amounts of soil heaped up in the area were all washed down, although it was not immediately known whether the development was the direct cause. 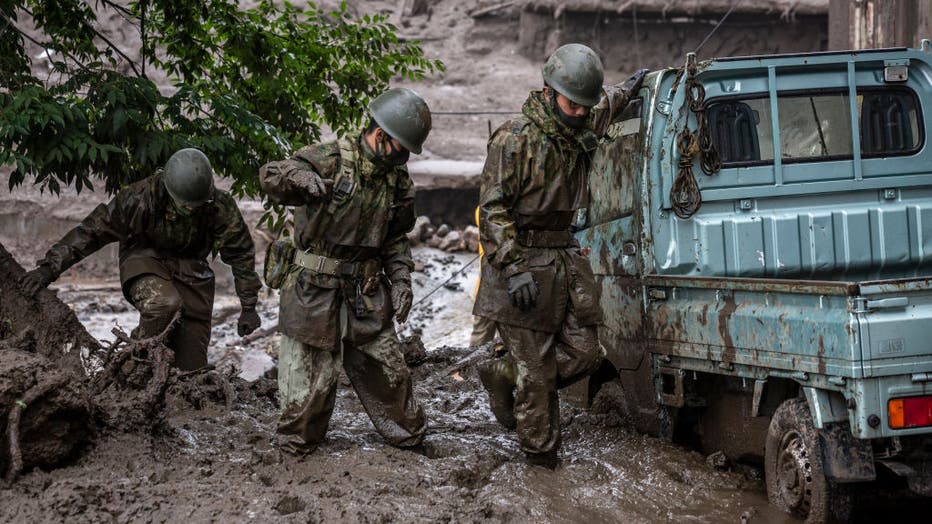 Japan Self-Defence Force (JSDF) soldiers works at the site of a landslide on July 04, 2021 in Atami, Shizuoka, Japan. (Photo by Yuichi Yamazaki/Getty Images)

Kawakatsu said he will investigate the land development. Media reports said a planned housing development had been abandoned after its operator had a financial problem.

The mudslide early Saturday crashed down a mountainside into rows of houses following heavy rains that began several days ago. Bystanders, their gasps of horror audible, caught the scene on cell phone video.

Witnesses said they heard a giant roar and then watched helplessly as homes were swallowed up by the muddy waves.

Like many others, Mariko Hattori, an interpreter who lives a short walk away from where the tsunami-like torrent of mud struck, at first didn't know what happened.

"The first things I noticed were lots of emergency vehicles. I didn’t know what happened at first," she said. "Then I was frightened when I saw the footage."

The area of Atami where the mudslide struck, Izusan, is a seaside resort about 100 kilometers (60 miles) southwest of Tokyo. It's known for hot springs, a shrine and shopping streets.

At an evacuation center, Yuka Komatsu, 47, told the Asahi newspaper she narrowly escaped the mudslide after seeing a nearby apartment building being hit. Frightened, she gabbed her mother and jumped into her car. In the rearview mirror, she saw muddy water swelling and coming from behind as it washed down broken trees and rocks.

"I wonder what happened to our house," she said.