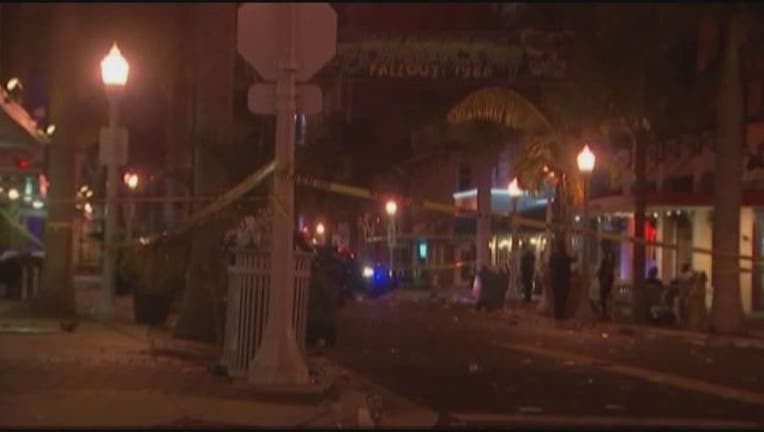 FORT MYERS (ASSOCIATED PRESS) - A shooting at the annual ZombiCon gathering in Florida has left one person dead and five more injured, causing a chaotic scene that sent throngs of zombie-dressed revelers running through the streets, police said Sunday.

The shooting happened around 11:45 p.m. Saturday, just 15 minutes before the event officially ended. Large crowds were still in the streets and authorities quickly cleared out nearby bars and set up crime scene tape, while others patrolled the area with rifles searching for a suspect.

Fort Myers Police Lt. Victor Medico said Expavious Tyrell Taylor, a 20-year-old who played football at a local junior college, died at the scene, but no other details about his death were released.  Four others were taken to the hospital with non-life threatening injuries and one additional victim refused medical attention, authorities said.

Authorities said the suspect or suspects are still at large and did not release any information about a possible motive.

"There were a lot of witnesses down here, there were a lot of people taking pictures, videos with their cellphone," Medico told the News-Press. "Anything that could help with this investigation would be greatly appreciated."

Police did not immediately return email and phone call messages on Sunday seeking more details. Medico told reporters the agency had been inundated with national media requests and would not be making any comments "as we tirelessly investigate this incident and gather as many facts as possible."

The annual festival had been expected to draw more than 20,000 fans dressed as zombies, the newspaper said. Medico said the scene was described as "shoulder to shoulder."

Jill Stancel said she heard the shots and then saw people running from the downtown barbershop owned by her family. She and her family let several frightened witnesses inside the shop, where they quickly locked the door.

"I was right here," she said. "A mass of people ran screaming and trying to get in the shop."

Stancel was raised in the area and said she doesn't think the downtown area is dangerous, but said the shooting will be in the back of her mind at future events.

"There are people dressed up and some walking around with guns. How do you know they aren't real? Any event I come to, this will be in the back of my mind."

Authorities were reviewing surveillance videos from restaurants and shops to help them find the suspect or suspects.

A statement on the ZombiCon Facebook page said organizers were saddened by the news and the group takes the safety of its patrons very seriously.

ZombiCon has been a popular event for nearly a decade, but some local residents and business owners have not welcomed the crowd of costumed revelers in the street dressed as limping, bloated, degrading corpses. One restaurant posted signs warning visitors that ZombiCon participants were not welcome. "Quarantined. No Zombies allowed," the signs read.

Several members from a religious group also picketed the event this weekend.

Mayor Randall P. Henderson Jr. said the shooting would speed up plans to install security cameras throughout downtown. The ZombiCon shooting is the latest of several shootings, which the mayor said are difficult to prevent because they are often random and late at night. Yet he said the cameras would make it easier to catch criminals quickly.

"Sadly, we're moving in that direction. We need to be way more vigilant to keep citizens safe," he said.