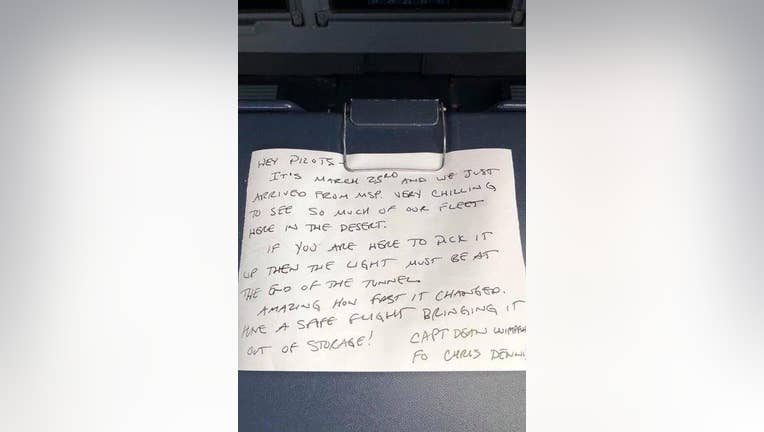 If you are here to pick it up, then the light must be at the end of the tunnel.

VICTORVILLE, Calif. - That was a portion of a note written by a pilot who took a Delta Air Lines plane to the California desert at the start of the COVID-19 pandemic.

On June 10, officials with Delta posted a photo of the note to its Facebook page.

According to Delta's website, the note was left on a plane by First Officer Chris Dennis, who took the place to Victorville, Calif. from Minneapolis.

"Taking off from [Minneapolis–Saint Paul International Airport], he heard talks of a two-week lockdown. Feeling the weight of the moment, he penned a note for the pilot that would do the return to service flight and left it on the parked plane," read a portion of the Facebook post.

Delta officials say the note is dated March 23, 2020, and wished whoever is bringing the plane out of storage a safe flight. The note was tucked away in a folded-up tray table on in the cockpit of an Airbus A321 aircraft.

"While the world certainly has changed over the past year, one thing is for certain: we won't be taking that open runway for granted anytime soon," read a portion of Delta's post.