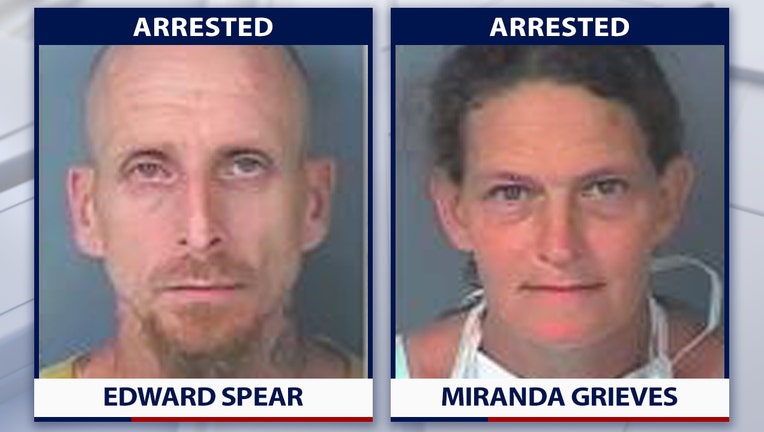 BROOKSVILLE, Fla. - Deputies arrested Edward Spear and Miranda Grieves after investigating a tip related to a burglary at the Humane Society of the Nature Coast.

The next day, an anonymous tipster gave deputies the first names of Eddie and Miranda and said they may be connected to the crime. The tipster said the couple recently acquired a large quantity of dog food and a generator.

The Crime Analysis Unit pointed to Spear and Grieves and possible suspects. Detectives went to Spring Hill Health and Rehab where Grieves was supposed to be working, but a manager said Grieves had called in sick.

The manager indicated several items were reported stolen from the facility a few days ago including a leaf blower, pressure washer, and a yellow wheelbarrow, according to the Hernando County Sheriff's Office.

Detectives then went to Grieves' last known address in Brooksville where the property owner let them in. Detectives located a wheelbarrow belonging to Spring Hill Health and Rehab.

On Wednesday, Grieves called detectives wanting to speak about the investigation. Detectives met with Grieves in the parking lot of the Walmart in Brooksville.

While speaking with Grieves, detectives located Spear sitting in a vehicle watching Grieves speak with law enforcement. Both Grieves and Spear were taken into custody.

According to detectives, upon questioning, both individuals admitted to burglarizing the Humane Society of the Nature Coast on Saturday.

RELATED: After nearly all supplies stolen from Humane Society in Hernando County, community steps in with donations

Spear indicated he returned to the property several times on Saturday and Sunday to remove and transport various items from the shed, detectives said.

Detectives said Grieves told them that they sold the stolen items to pay for drugs. She also indicated she planned to use some of the money to pay outstanding traffic fines.

Detectives were able to make contact with several individuals who purchased the stolen property. Those items, including the generators, leaf blower, push mower, and chainsaw, were recovered and later returned to the humane society.

Spear was charged with three counts of burglary and grand theft, and four counts of dealing in stolen property. His bond was set at $70,000.

Grieves was charged with burglary, grand theft, and dealing in stolen property. Her bond was set at $22,000.