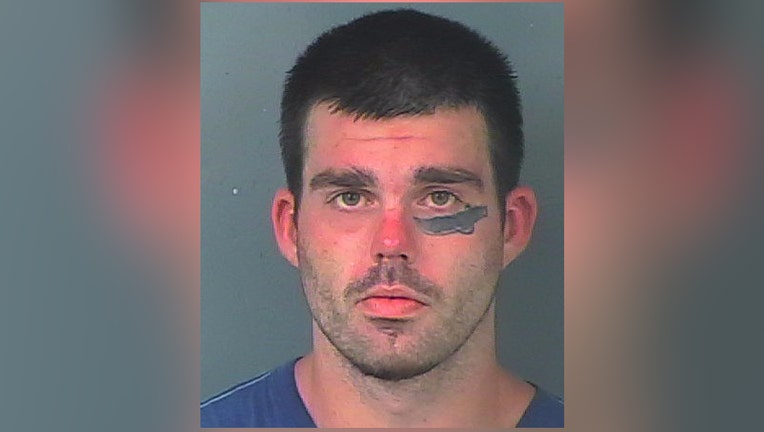 SPRING HILL, Fla. - Justin Arthur Allen Couch, 25, has been charged with aggravated battery after allegedly attacking someone with a machete.

According to the Hernando County Sheriff’s Office, deputies responded to a home on Tarrytown Drive in spring Hill around 2:30 p.m. on Monday in regards to a battery that occurred earlier.

Deputies said the victim, an adult male, told them that he is currently staying at the Tarrytown home and when he entered the home around 10 p.m. Saturday to take a shower several people were there “having a gathering.”

Deputies said Couch told the victim he needed to leave the residence/property.  The victim agreed to leave and said he just wanted to go inside to retrieve his wallet and cell phone, but Couch told him no.

The victim told deputies when he insisted on getting his wallet and cell phone from inside the residence, Couch began striking the victim in the arm and leg with what the victim believed was the flat side of the machete's blade.

According to HCSO, Couch then swung the machete at the victim's face. To block the strike, the victim quickly placed his left arm in front of his face.  Deputies said the victim's left forearm was struck with the blade of the machete and he passed out.

The victim told deputies he made his way to 494 Stillwater Avenue in Spring Hill because he knew Couch would be at that location.
When the victim and Couch met up at this location, Couch transported the victim to an unknown friend's house.

The "unknown friend" then transported the victim to Bayfront Health Spring Hill, where he was treated for the injury.

Deputies spoke with two individuals who live at the Tarrytown Drive address regarding the incident.  One individual did witness the altercation and provided a sworn statement.
The other individual advised he did not see or hear anything, but he did pick up the victim from the Stillwater Drive address and take him to the hospital.

The victim is currently unable to use or move his left hand due to the severity of the injury he sustained, according to HCSO.