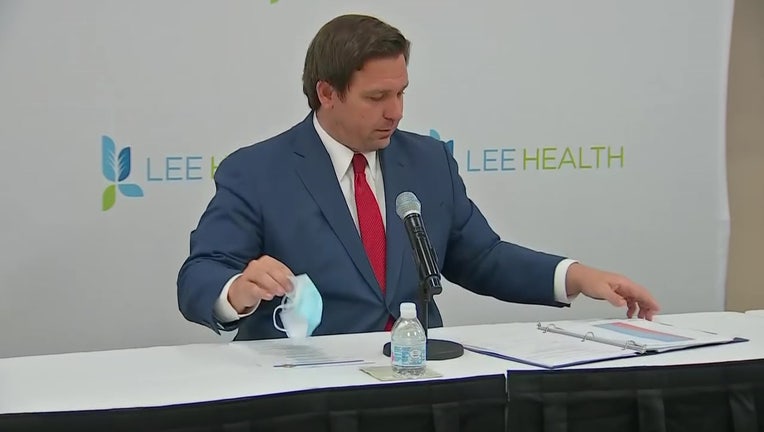 FORT MYERS, Fla. - On a day where Florida shattered its record for the largest single-day increase in coronavirus cases, Gov. Ron DeSantis reiterated that he would not make face coverings mandatory statewide.

During a Friday afternoon press conference in Fort Myers, the governor said enforcing such a mandate would be problematic.

“We’ve advised that’s something that could make an impact,” DeSantis said. “At the same time, to do police and put criminal penalties on that is something that probably would backfire.”

Instead, DeSantis said mandates should be left up to local governments. Several cities and counties in the state, including Hillsborough and Pinellas, have issued emergency orders requiring masks to be worn indoors in public.

The issue has sparked fierce debates, with some people taking the advice of public health officials who say face coverings can reduce the spread of COVID-19, while others see mask requirements as a government intrusion into personal liberties.

But business groups say a "patchwork" of local face-mask ordinances across Florida is creating confusion for store owners and customers.

Florida Retail Federation CEO Scott Shalley said some ordinances could lead to businesses being fined if customers refuse to wear masks. He said it is unfair to make store employees police the mask mandates, which vary among communities.

“The mask issue, in and of itself, has shown itself to be very volatile,” Shalley said. “There is definitely, for some people, a political component to it. We really don’t think our sales associates, who are on the front lines providing services to Floridians, should be the ones to be in the middle of that battleground.”

“This patchwork of local regulations has created confusion and underscored the challenges small businesses face as they struggle to recover from the shutdown,” Bill Herrle, NFIB’s state executive director in Florida, said in a prepared statement.

“Under many of these ordinances, owners could be held criminally liable if customers don't follow the rules and wear a mask. We believe draconian rules that arbitrarily punish small business owners are unfair, especially when the owners are doing everything they can to protect their customers and employees and prevent the virus from spreading.”

Colleen Corbett, a 30-year-old bartender at two places in Tampa, said that she was disappointed and worried about being unemployed again but that the restrictions are the right move. Most customers, she said, were not wearing masks.

“It was like they forgot there was a pandemic or just stopped caring," she said.

DeSantis has been lifting restrictions more slowly than a task force recommended, but has allowed theme parks to reopen, encouraged professional sports to come to Florida and pushed for the GOP convention to be held in the Sunshine State.

While the rise in cases across the country partly reflects expanded testing, experts say there is ample evidence the scourge is making a comeback, including rising deaths and hospitalizations in parts of the country and higher percentages of tests coming back positive for the virus.

At the task force briefing, Dr. Anthony Fauci, the nation’s top infectious-disease expert, urged people to mind their responsibility to others: “A risk for you is not just isolated to you.”

The News Service of Florida and the Associated Press contributed to this report.