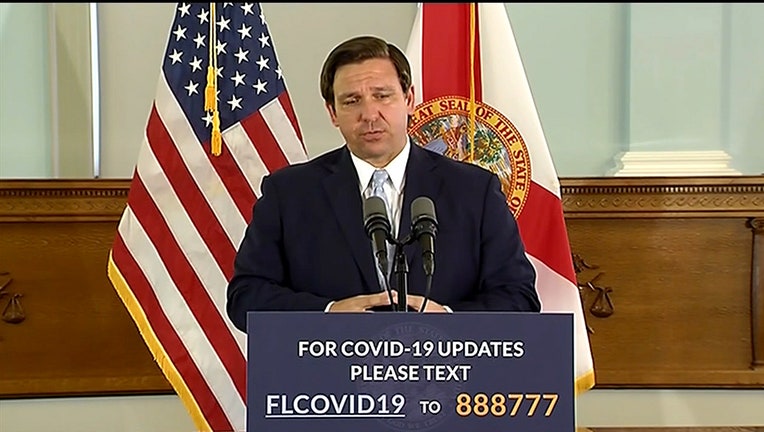 FORT LAUDERDALE, Fla. - Florida Gov. Ron DeSantis has issued an executive order to once again extend the ongoing state of emergency for another 60 days.

The state of emergency had originally been issued back in March, and was extended in May in response to the coronavirus pandemic.

The move allows DeSantis to broaden his powers as governor, including allowing him to deploy National Guard troops if necessary, utilize out-of-state medical personnel, and swifly purchase necessary supplies.

They called on the Republican governor to close beaches and again close gyms and bar inside dining at restaurants statewide. They said he has never met with a bipartisan congressional delegation to discuss the virus and his administration's order Monday requiring school districts to reopen classrooms this fall usurps local authority and endangers families.

“The failure of leadership at the national and state level has put us in the position we are in now,” said Rep. Lois Frankel of Palm Beach County. “If we had starved the virus at the beginning and completely shutdown ... and got everyone to wear masks, we would be in a much different position today and we would have saved lives.”

Rep. Debbie Wasserman Schultz of Broward County said during the conference call with reporters that DeSantis has failed to provide “honest, courageous leadership."

“The governor told us (Monday) the surge is stabilized with a straight face," she said. “This is a total gaslight of Florida residents and right in tune with his longstanding campaign of half-truths and mixed messages throughout this crisis.”

DeSantis said at a Tuesday press conference that the key to curtailing the virus is for vulnerable people like the elderly or chronically ill to self-isolate and for others to wear masks and practice social distancing when in public spaces.

“Especially when it is hot out, when you pack a bunch of people in a private residence or have a party with loud music and a lot of hootin' and hollerin', that is going to be a strong venue for transmission," he said.

The governor has refused to issue a statewide mask order, however, saying that should be left to counties and cities, that what is right in Miami or Orlando is not necessarily needed in rural communities.

Many of the state's major metropolitan areas have issued orders requiring masks inside public buildings and some closed beaches over the July Fourth weekend. Miami-Dade County on Monday again limited restaurants to outdoor dining, takeout and delivery.

Related: Masks will be mandatory for Hillsborough students and staff, superintendent says

Meanwhile, in Jacksonville, where the Republican Party moved next month's national convention because of social distancing requirements in North Carolina, Mayor Lenny Curry announced Tuesday that he and his family are in self-quarantine after he was exposed to the virus. Curry said he has tested negative but wants to be cautious.

The Democrats' call came shortly after the state confirmed 7,347 new cases Tuesday, bringing the total since March 1 to 213,794. Another 63 people died, bringing the total to 3,943. The 45 deaths per day averaged over the last week is a 50% jump since three weeks ago.

The biggest factor is that the seven-day average for tests returning as positive has skyrocketed, jumping from 4% a month ago to almost 19% on Tuesday. In late May, not long after the state's economy began reopening, the positivity rate was 2.3%.

On Monday, Education Commissioner Richard Corcoran ordered schools to reopen classrooms in August, unless health officials deemed it unsafe to do so.

Distance learning would still be provided to students whose parents don't want them to return to their schools.

“There is a need to open schools fully to ensure the quality and continuity of the educational process, the comprehensive well-being of students and families and a return to Florida hitting its full economic stride,” his order states.

To prevent the spread of COVID-19, schools closed in March and instruction was offered online to the state’s 2.9 million pupils. State officials hope that reopening campuses will help the economy fully recover.

Broward County School Superintendent Robert Runcie said Tuesday that it is unrealistic for his district, the state's second-largest, to fully reopen this fall.

“We will never compromise the health and safety of our students, teachers and staff,” he said.

The Florida Education Association, the state teachers union, recently called on DeSantis to change how schools operate, including staggered schedules and imposing social distancing measures on buses and campuses.

The union also requested that schools test students for COVID-19 and put procedures in place to isolate those infected.

FOX 35 Orlando contributed to this report.