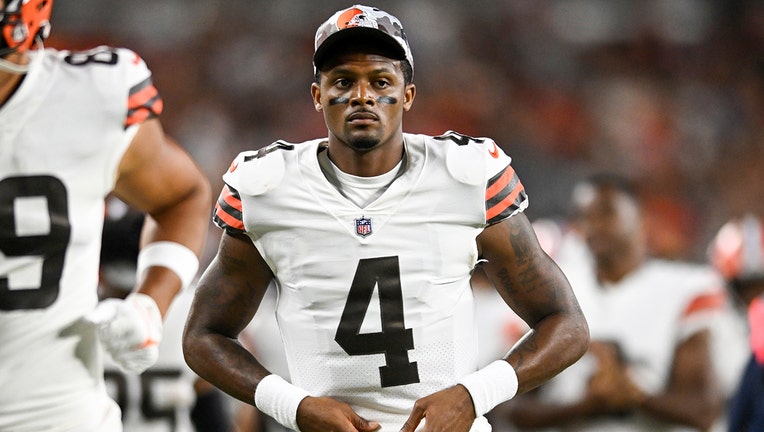 CLEVELAND, OH - AUGUST 27: Deshaun Watson #4 of the Cleveland Browns runs off the field at halftime of a preseason game against the Chicago Bears at FirstEnergy Stadium on August 27, 2022 in Cleveland, Ohio. (Photo by Nick Cammett/Diamond Images via

HOUSTON - Deshaun Watson will make his debut for the Cleveland Browns Sunday against his former team following an 11-game suspension, and at least 10 of his accusers will be watching from the stands.

Tony Buzbee, a lawyer representing the 25 women who have accused the former Houston Texans quarterback of sexual misconduct, told The Athletic in a report published Tuesday that he and around 10 of the women he represents will be in a suite at NRG Stadium to send a message to Watson.

"You think you put us behind you, but we are still here," Buzbee said.

KEVIN STEFANSKI ON DESHAUN WATSON’S DEBUT FOR BROWNS VS TEXANS: ‘I THINK HE WILL BE READY TO ROLL’

Buzbee has been critical of the discipline Watson has faced. After Watson’s six-game suspension was revised to 11 games, Buzbee released a statement criticizing NFL commissioner Roger Goodell.

"By settling this matter the way he has, Roger Goodell has proven one of two things: either his recent rhetoric was utter baloney, or his bark is much worse than his bite. My belief is that he is nothing more than a paper tiger," Buzbee said in a statement at the time.

"The message today to all victims is clear: If you believe you have been sexually assaulted by a powerful person, keep your mouth shut and go away. The NFL has certainly demonstrated that its ownership and the organization doesn’t care."

Ultimately, 25 women represented by Buzbee filed lawsuits. One woman dropped her lawsuit while 23 others settled their cases in August. In July, 30 women who had accused the Texans of turning a blind eye to allegations against their former star quarterback settled their legal claims against the team.