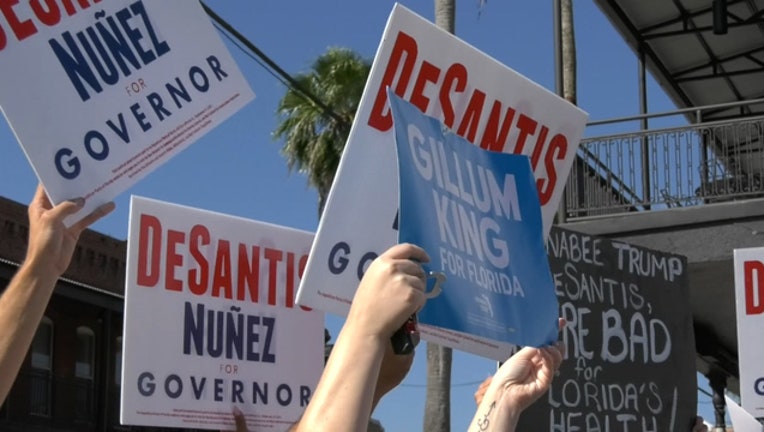 ST. PETERSBURG (FOX 13) - It is no rest for the weary as Florida's candidates for governor campaign tirelessly, with less than two weeks until election day.

“We’ve got to be willing to work over the next ten days to get as many voters out there as we can," said Democratic candidate Andrew Gillum.

Gillum and DeSantis both rallied in Pinellas County Saturday; Gillum in St. Petersburg and DeSantis in Tarpon Springs.

Their supporters were confident in their candidates.

“Democrats are for Gillum, Republicans are for DeSantis," said Joyce Thompson, a DeSantis supporter.

But one thing voters can agree on is that the race has turned somewhat ugly. Some calling it "not pretty," "polarizing" and "heated" Saturday.

In the past week, the candidates have debated twice, sparring over the issues, and former Congressman DeSantis took heat for addressing Mayor Gillum as Andrew.

“He called me a dog at the debate. Did you watch that?" DeSantis said. "So what, he has his own standard and I have a different standard? Is there a double standard here? Ok fine. Crooked Mayor Gillum, how about that? He took bribes, he was wrong. How about failed Mayor Gillum? He has the highest crime in Tallahassee. The highest number of murders in history. His former chief of staff is campaigning against his record running for Tallahassee right now. How about radical Mayor Gillum? Because he signed this Dream Defender's pledge and he will not disavow them. He stands with them, he stands by them. They are militantly anti-police. So look, it is what it is, but I'm going to shoot straight."

DeSantis referred to a comment made by Gillum during Wednesday's debate when the mayor accused the congressman of giving speeches to racist groups.

“My grandmother used to say 'a hit dog will holler,' and it hollered through this room," Gillum said.

But both sides' supporters say beyond the heat, it comes down to getting or keeping the sunshine state on track.

“We need someone who has the understanding of what’s needed for the people of this state," said Gillum supporter Raymond Tampa.

“We have a wonderful thing going here in Florida, let’s keep it that way," said Joyce Thompson, who plans to vote for DeSantis.

Sunday, DeSantis will be campaigning in Coral Springs and Melbourne. Gillum will continue his bus tour up north to Jacksonville, St. Augustine, along with Kissimmee and Green Cove Springs.