BURBANK, Calif. - Disney launched its much-hyped family-friendly Plus streaming service Tuesday, but some subscribers ran into technical difficulties hours after its debut.

Users took to Twitter early Tuesday morning to say the commercial-free service, which costs $7 a month or $70 for the year if paid upfront, is currently not paying off. 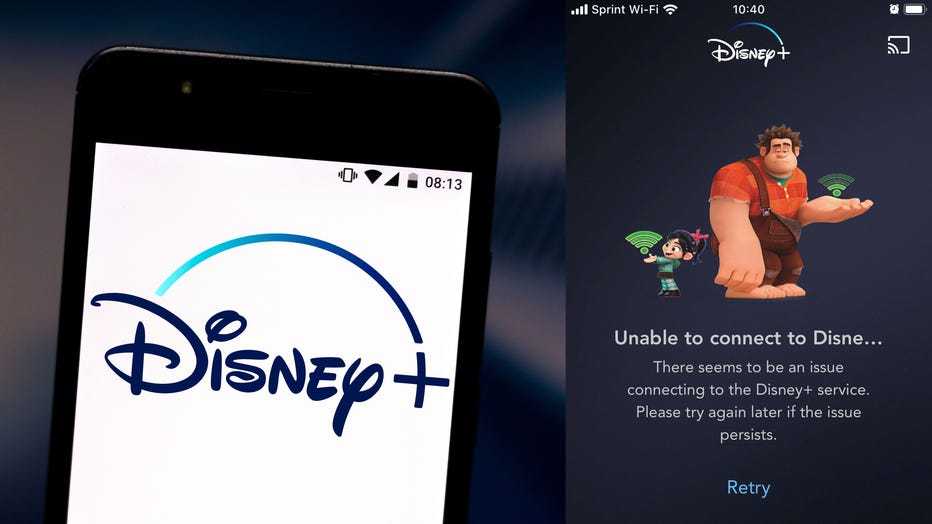 A file image shows the Disney+ logo on a smartphone, alongside a screenshot of the streaming service experiencing an issue on Nov. 12, 2019. (Photo: Rafael Henrique/SOPA Images/LightRocket via Getty Images & The Walt Disney Company via FOX 5 NY)

The website downdetector.com received more than 7,000 reports of connection problems, according to Seeking Alpha.

One Twitter user wrote, "And #DisneyPlus already crashed. Not a great start. "

Another subscriber tweeted, "My kid just woke up and @Disneyplus has crashed."

The company previously boasted its streaming service saying subscribers would be privy to more than 500 family-friendly movies and 7,500 TV episodes. In five years, that number is expected to swell to about 620 movies and 10,000 episodes as existing deals with rival streaming services expire.

The service is poised to set the standard for other services like WarnerMedia’s HBO Max and NBCUniversal’s Peacock to follow, as major media companies behind hit TV shows and movies seek to siphon the subscription revenue now going to Netflix and other streaming giants.

But if you're looking for R-rated movies, you're out of luck.

"There will be nothing on Disney+ that's not branded or family-friendly," Kevin Mayer, the chairman of Disney's direct to consumer division, said during a preview event at the Disney studios, USA Today reports.

But despite the vast selection, Disney has positioned Hulu as its adult alternative which will house R-rated content. The "Deadpool" films that are produced by Fox but star Marvel characters are among the films that call Hulu home.

Disney took full control of Hulu earlier this year but had already become the majority owner of Hulu when it absorbed Fox's stake as part of its purchase of Fox's entertainment business.

In addition to its lack of R-rated material, some movies and shows will await expiration of existing streaming deals with rivals before they can join the ranks of other kid-friendly movies on the service. This includes the Pixar cartoon "Coco," the live-action "Beauty and the Beast" and the Star Wars movies "The Last Jedi" and "Solo."

Others like "Maleficent: Mistress of Evil" and “The Lion King” remake haven't been released for streaming yet. "Maleficent" is still in theaters. Other original TV shows like Marvel's "Loki" are still in the works.

The streaming service will offer classics such as "Cinderella," "Snow White and the Seven Dwarfs," "Pinocchio," "Swiss Family Robinson" and "Fantasia."

In addition, the majority of the 21 Pixar movies will be on the service and eight Marvel movies including "Avengers: Endgame," "Avengers: Age of Ultron," "Iron Man," "Iron Man 3," "Captain Marvel" and "Guardians of the Galaxy" will be available to subscribers.