From delicious recipes to new Star Wars content to stream -- here are some of the ways you can celebrate May the Fourth, known to fans as Star Wars Day.

ORLANDO, Fla. - The lightsaber from "Star Wars" is probably the most recognizable film prop in the history of cinema and the most coveted piece of merchandise among kids and adult sci-fi fans alike.

While there never has been anything created that comes close to the weapon of the Jedi, Disney revealed that a real lightsaber might soon be available in a galaxy not so far away.

READ MORE: Celebrate May the 4th with activities from a galaxy far, far away

On Tuesday, in honor of May 4, otherwise known as Star Wars Day, Disney Parks posted a 13-second clip on YouTube showing a Disney performer portraying Rey, the protagonist from the most recent "Star Wars" trilogy holding a lightsaber. A retractable blade of light extends from the handle just like in the movies.

But consumers shouldn’t have to be concerned about their children wielding a deadly laser blade that can cut through anything like it does in the films.

While no photos or video were allowed at the event, Walt Disney Imagineering Studio Leader, Scott Trowbridge confirmed the news when he tweeted on April 8, "A lot of questions today about whether the lightsaber that Josh D'Amaro revealed today was real or CGI, and, whether I'd share photos or video. Yes it was/is really real, and..... not yet."

The lightsaber was then teased on May 4, along with Disney’s new immersive hotel and attraction, "Star Wars: Galactic Starcruiser." 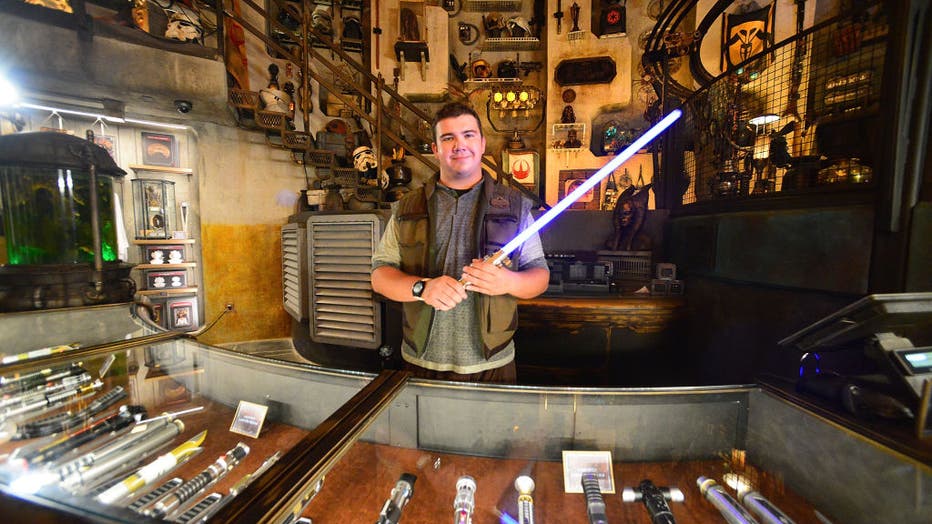 A cast member poses with a lightsabers at the Dok-Ondar's Den of Antiquities at the Star Wars: Galaxy's Edge Walt Disney World Resort Opening at Disney’s Hollywood Studios on August 27, 2019 in Orlando, Florida.

"Yes, that’s a new type of lightsaber Rey is holding in her hand, created by Walt Disney Imagineering Research and Development," Disney Parks wrote in a blog post on Tuesday. "Watching that lightsaber activate right before your eyes will be just one of the countless ways that, from the moment you arrive to the moment you depart, you’ll be plunged into a Star Wars story where your decisions and actions – or even the casual conversations you may have – determine how your personal journey unfolds."