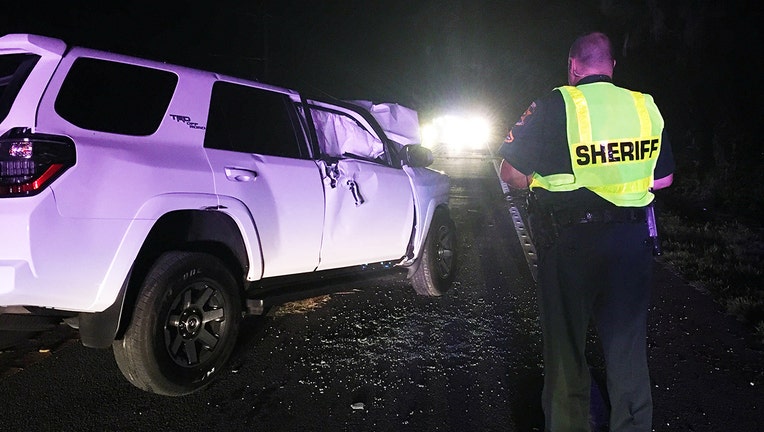 LAKELAND, Fla. - Two drivers are dead after one of them veered off a roadway, causing a three-vehicle   crash in Lakeland, investigators said, adding that the driver's vehicle was involved in a highway hit-and-run crash earlier in the day.

After 8 p.m. Tuesday, Polk County deputies received a report about the triple-vehicle crash, located on Combee Road near Centurion Drive.

Investigators said 57-year-old driver from Fort Lauderdale was traveling south on Combee Road in a semi-truck. Behind him was a white 2002 GMC pick-up truck with 31-year-old Justin Parks as the driver.

During the investigation, deputies said witnesses told them that Faircloth crossed the center line and struck the semi-truck's trailer. Then, detectives said the Toyota hit Parks' GMC head-on. The pick-up truck caught fire.

Parks and Faircloth passed away from their injuries after the crash. The driver of the semi-truck was not injured.

Detectives said they are still trying to determine what caused Faircloth's vehicle to hit the semi-truck and pick-up truck.

They said Faircloth has had a revoked driver's license since 2013. After Florida Highway Patrol troopers arrived on scene, they said Faircloth's Toyota was involved in a hit-and-run crash along Interstate 4 earlier in the day.

Investigators did not say whether Faircloth was behind the wheel in the hit-and-run.