DUNEDIN, Fla. - FOX 13 discovered a problem that is freezing bank accounts and holding up benefits for grieving families in Florida and across the nation.

The story of Kelan and Andrea Hammond of Dunedin is one of many that illustrates the crisis. Kelan died unexpectedly in Puerto Rico in June. Puerto Rico botched his death investigation and his death certificate, which has put Andrea on the brink of financial ruin.

Kelan Hammond was a Navy veteran who trained at the bombing range in Vieques, Puerto Rico years ago. After the bombing and training range closed, Kalen left his home in Dunedin on a government contract to dig out the bombs.

“He was all about America, proud of being a veteran, proud of his country,” said Andrea. “He worked hard they said he was one of the fastest diggers.”

Andrea said he had complained of feeling light-headed and tired after some of the digs, but we can't say if that had anything to do with his sudden death because the government of Puerto Rico can't - or won't - say much of anything.

Andrea was already devastated by losing Kalen. Then she discovered the added problems with dying in Puerto Rico. First, she learned Puerto Rico has a centralized forensic science facility, on an island facing a shortage of pathologists, run by a government reeling from poor planning, that was backlogged even before Hurricane Maria. 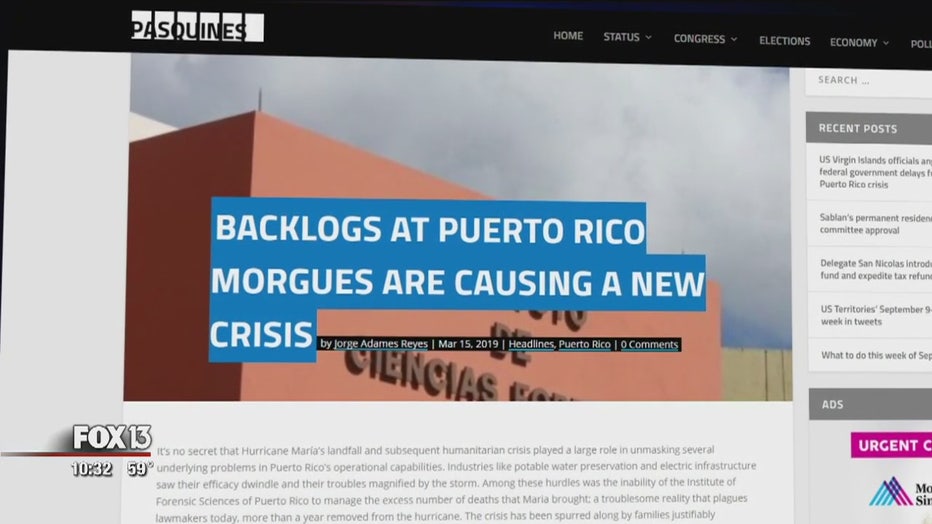 Andrea went to Puerto Rico to identify her husband's body.

“She calls and tells me my husband’s body is lost, that I did not identify my husband’s body. They’re telling me I need to leave the island. They will find my husband's body when the time is right,” said Andrea.

Then days later, she said they told her they had found Kelan at the crematory and would do the blood work and autopsy as required. Then after he was cremated, she found out they never performed the autopsy and the blood sample was reportedly lost.

Then she received the death certificate riddled with mistakes.

“I tell them that's not the correct date of death. I have a police report. I have an ambulance report that shows his death. They tell me there's nothing that can be done,” Andrea said.

It also states there was an autopsy and the cause of death is still pending.

She said she soon discovered no one would accept the death certificate, so she can’t gain access to her husband’s bank accounts or pay for the vehicle in his name. Veteran benefits are held up. Three life insurance policies are locked up. She can't even cancel his health and dental insurance.

“I can’t get anything. All of them are telling me nothing can be done,” she said. “We will probably lose everything Kalen and I worked for, everything we worked hard for can be lost because there is no accountability and they don't seem to care” 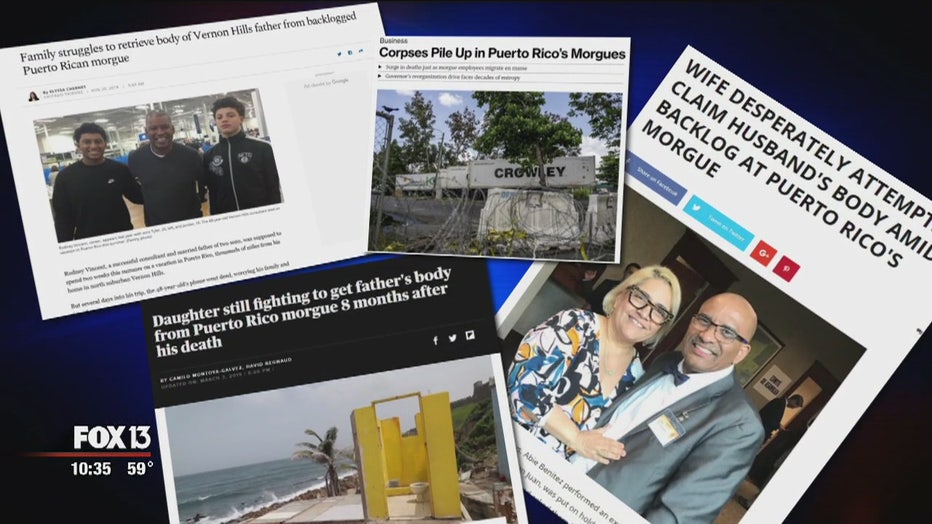 She's not alone. National news reports show other families are stuck in the same predicament because the forensic science operation in Puerto Rico is failing grieving families across the nation.

"If you die in Puerto Rico, waiting a very long time to be getting benefits you are entitled to. You’ll just come across family member after family member who say, 'I'm going through this too,'" added Zornow.