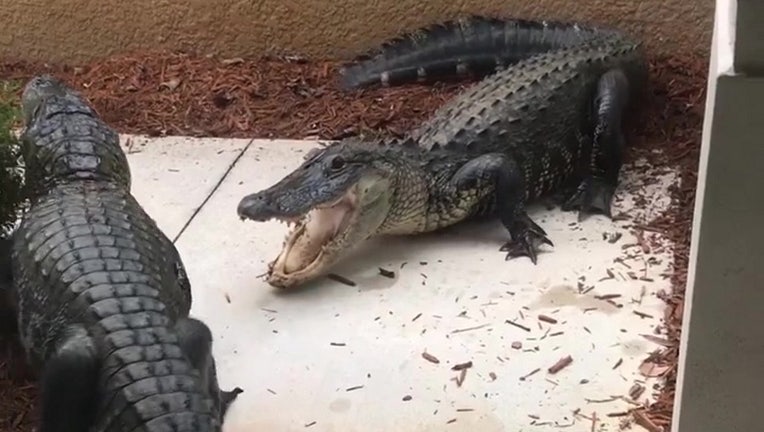 FORT MYERS, Fla. - The pounding on Susan Geshel’s front door at 6:45 a.m. last Tuesday may have surprised her, but what was even more shocking was what caused the noise, a Florida newspaper reported.

Much to her surprise, she found that source: two alligators, each around 7 feet in length, fighting outside her Pelican Preserve home in Fort Myers, the Fort Myers News-Press reported.

She saw one of the alligator’s snouts pinned to the glass window and door, the report said. Meanwhile, the other one was at a distance with its jaws open.

What truly frightened her, however, was one of the alligators had clamped its jaws on the body of the other and had pinned it to a wall.

Geshel captured the moment on video and posted it to Facebook, before calling her husband, Joe, the newspaper said.

After 20 minutes, Geshel said the alligators exited, with one crossing the street to a neighbor's house. She told the newspaper she did not see where the other went, but it may have gone to a pond near the area.

“They made a mess on the front door,” Geshel said.

Geshel, who has lived at Pelican Preserve for 15 years, said it was the first time she had seen alligators outside her home.

Melody Kilborn, a Florida Fish and Wildlife Conservation Commission spokeswoman, said the two adult male alligators in Geshel's video are exhibiting a typical reaction to being in a somewhat confined space.

"Alligators are most active and visible when the weather is warm, and in some places in Florida, that can occur year-round," Kilborn said in a written statement.

Alligator courtship begins in April and mating usually occurs in May and June, Kilborn told the News-Press. They become sexually mature and active when they reach about 7 feet in length, according to FWC.