Does dark chocolate make us happy?

The study looked at data on 13,626 adults who took part in a national health and nutrition survey, and the findings were published in the journal Depression & Anxiety.

Researchers found that, out of all participants who reported regular chocolate consumption, only those who ate dark chocolate had significantly lower odds of depressive symptoms.

“In the case of dark chocolate, it was particularly powerful; when people consumed dark chocolate, it reduced the risk of depression or had a 70 percent lower risk of looking depressed on the scales that they used,” said Cleveland Clinic’s Scott Bea, PsyD, who did not take part in the study.

Dr. Bea said people are always looking for ways to keep their moods up that don’t require a lot of energy.

“I think we’re always looking for other ways to be happy – we know that good, robust exercise, has protective factors against depression – but, eating chocolate just seems easier,” he said.

Dark chocolate, which is rich in iron, copper, magnesium, zinc and phosphorous, has been shown to have myriad health benefits.

Cocoa contains flavanols, which have been shown to lower blood pressure by relaxing blood vessels and improving blood flow and which may help to protect the heart, and dark chocolate has up to three times as many flavanol-rich cocoa solids than milk chocolate. 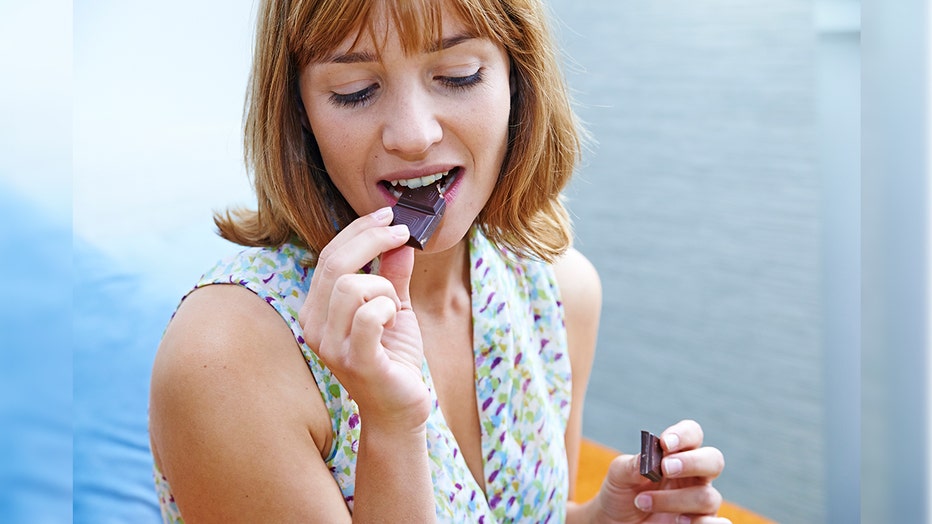 Eating dark chocolate may reduce risk of depression, according to a new study. (BSIP/Universal Images Group via Getty Images)

In other observational studies, a link has been found between high cocoa or chocolate intake (about six grams, or one to two small squares) and a reduced risk of heart disease and mortality, according to a report from the Harvard T.H. Chan School of Public Health.While we know that dark chocolate has more health benefits than other types of chocolate, it’s not yet clear in the context of the most recent study if it’s the ingredients in dark chocolate that make us happy, or if happy people gravitate toward choosing dark chocolate over other options.

Dr. Bea said experts suspect that in the short term, chocolate leads to a boost in our rewarding brain chemicals.

Either way, if eating dark chocolate – in moderation – makes us happy, he said there’s nothing wrong with that.

Study authors can point to a handful of ingredients in dark chocolate that could boost mood regulation, but more research is necessary to determine if the relationship is causal.