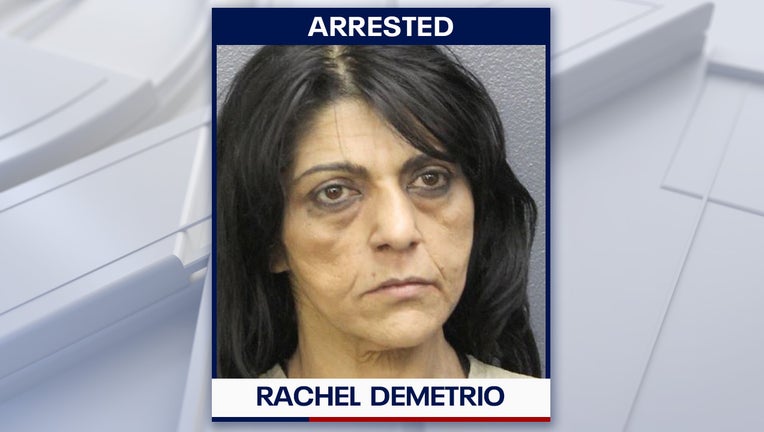 MIRAMAR, Fla. - A woman who claimed to be a worker with Florida Power & Light is accused of stealing more than $25,000 in jewelry from the home of an 81-year-old South Florida widow, police said.

Police in Miramar arrested Rachel Demetrio, 49, on Thursday on charges that include burglary and grand theft from a person 65 or older. Her partner is still being sought, police announced on Sunday.

On June 25, a man who claimed to work for the power company knocked on Diane Reeves' door and asked her to go into the backyard with him. He wanted to show her where they would be moving her water meter, police said.

She went into the backyard but started to question why they were moving the meter to a spot further away from her house, police said. He told her to wait and he would send his partner to speak to her.

Demetrio then showed up, spoke to Reeves and again asked her to wait in the yard. After 10 minutes she went into the house and realized she'd been robbed, Reeves said during a news conference last week.

The items stolen include a charm bracelet Reeves' mother gave her in 1961, her wedding ring and a pocket watch Reeves bought for her late husband.

"The things that they took from me, it’s not the monetary value, it’s so many sentimental things over the years," Reeves told WSVN as she fought back tears, saying the stolen items are irreplaceable.

The search continues for the man who accompanied Demetrio.

Records didn't list a lawyer who could speak on behalf of Demetrio.