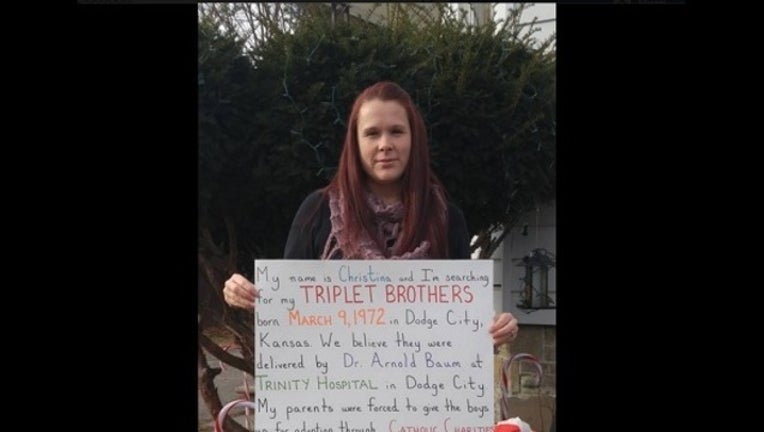 NEW YORK– A New York family is turning to Facebook to try and find triplet boys who were given up for adoption in 1972.

“My name is Christina and I’m searching for my triplet brothers born March 9, 1972 in Dodge City, Kansas. We believe they were delivered by Dr. Arnold Baum at Trinity Hospital in Dodge City. My parents were forced to give the boys up for adoption through Catholic Charities.

The triplets are supposed to be kept together but may have been separated. They would be 43 years old now. My parents ended up marrying, and are still together. Our family is searching. If you have any information, please contact us at christinasearch3@gmail.com”

NBC News reports that the triplets’ mother, Cynthia Bush, was 16 years old when she became pregnant. She was sent to stay with an aunt in Kansas until she gave birth, and then an adoption was arranged through Catholic Charities.

She told NBC News that she returned home to New York where she married the triplets’ father and they had three more children together. Bush said she has always wondered about the triplets and felt something was missing from her life.

Bush’s daughter, Christina, is hoping her Facebook post helps track down her long-lost brothers. It has already been shared thousands of times.