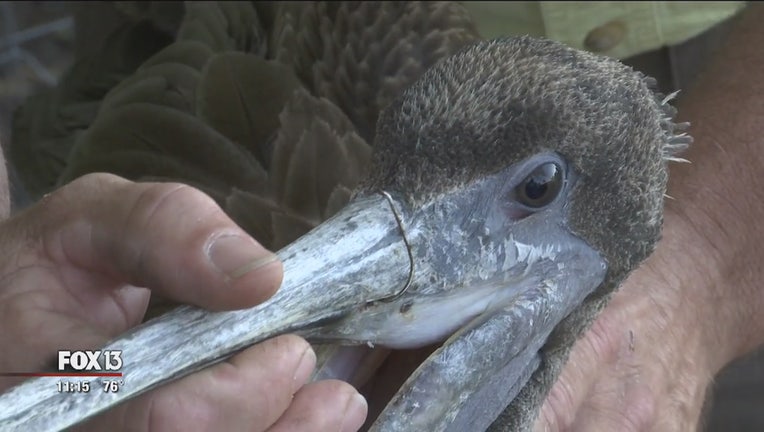 MADEIRA BEACH, Fla. - At least two pelicans are recovering after being caught on a fishing hook and tangled up in fishing line.

Paul Corsi says it was a heartbreaking sight as he swam out to the injured pelican. It was tangled up in a fishing line with a fish hook attached to it. He was able to bring it back to shore, but because of the injuries it's now unable to fly.

In the video, the pelican can be seen with a fish hook stuck to its body. It tried to swim back out into the water, but was still caught on the line. Corsi was able to safely retrieve the pelican and bring it back to shore.

"It is distressful. It's a touchy situation because people want to have their freedoms and want to be able to do things, but at the same time we have to show just a little more kindness," Corsi said.

A father and daughter helped rescue several pelicans who were hurt after becoming tangled in fishing line or caught on a fishing hook.

Once the pelican was brought back on shore, fishing line and a hook could be seen tangled around one of its wings. Using some plier cutters, Corsi was able to cut part of the line free.

Rescuers later discovered not just one, but several fishing lines tangled up in the bird's wings.

"You have a lot of people that just don't care. They don't know what to do in these types of situations so that's why education and public awareness is key," Corsi said.

Many times Corsi says fishermen who accidentally hook a bird just cut in the line, but according to FWC you should instead gently reel in the bird and try your best to remove the hook.

Corsi's 12-year-old daughter Cara also helped assist with the rescue. She and her father are hoping videos of rescues shed more light on an on-going problem.

"It definitely make me feel frustrated and upset. To think people would have the audacity and just be so soulless," Cara said.

In the midst of our interview, rescuers brought another pelican to the Corsi's for a hook removal -- this one with a fishing hook caught in its beak.

"Just because we're the dominant species doesn't mean we should make these animals feel like they're nothing," Cara said.

Both birds were taken to nearby rehab centers. As of right now, it's unclear if either will be able to be released back into the wild.