The FBI released new video of Capitol riot suspect 106 in connection to assaulting a federal officer during the Jan. 6 insurrection.

"The two new videos depict suspects #106 and #134, who are seen in the new videos forcefully attacking law enforcement officers," according to an FBI news release.

In the video depicting suspect #106, the unknown man is shown with a stick that another person takes out of the suspect’s hand before he lunges at one of the officers and starts "attempting to rip off" an officer’s gas mask. The suspect is then seen thrashing around as he attempts to take away an officer’s baton, which he successfully does before beating one of the officers with it. 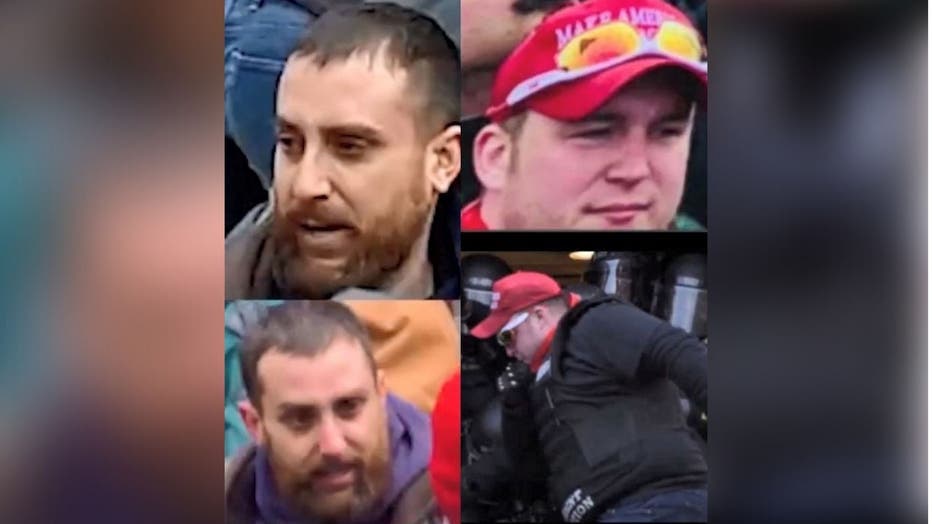 RELATED: As opposition from GOP leaders grows, House to vote on commission to investigate Capitol riot

In the second video, suspect #134, who appears to be a man wearing a "Make America Great Again" cap, is seen shoving an officer and appears to be punching them "while wearing gloves with metal knuckles," according to the FBI.

Both men are wanted for violent assaults on federal law enforcement officers, the FBI said.

The FBI has arrested 425 people in connection to the deadly siege on the Capitol when supporters of former President Donald Trump attempted to interfere with the Electoral College vote count in January by breaking into the building and wreaking havoc.

The FBI released new video of Capitol riot suspect 134 in connection to assaulting a federal officer during the Jan. 6 insurrection.

Five people were dead many more injured in the wake of the riot. Among the dead was a Capitol Police officer, who was later ruled to have died from natural causes.

"The American people answered the call when we asked for their help two months ago in identifying 10 individuals captured on video in some of the most violent attacks on officers who were protecting the U.S. Capitol on January 6," said Steven M. D’Antuono, assistant director in charge (ADIC) of the FBI’s Washington Field Office. "As difficult as it is to report family, friends, and co-workers, the American public continues to provide vital assistance to the FBI and our partners in this investigation."

RELATED: Amid threats to Congress members, House to vote on new security measure

"We are grateful for the tips we have received," D’Antuono continued. "But our work is not done. Today, we are releasing two additional videos of violent assaults on officers and again asking for the public’s help to identify the perpetrators."

The FBI has videos and photo galleries of suspects they are still trying to track down. Anyone with information is encouraged to contact by phone at 1-800-CALL-FBI or submit a tip online at tips.fbi.gov.

Meanwhile, the House is set to vote Wednesday on a bill that would create a 9/11-style commission on the deadly insurrection at the U.S. Capitol.

The bill is expected to pass, though several GOP leaders have said they oppose the legislation.

The opposition is a blow to Democrats who say an independent, bipartisan investigation of the siege is crucial to prevent it from happening again.

Megan Ziegler contributed to this report.