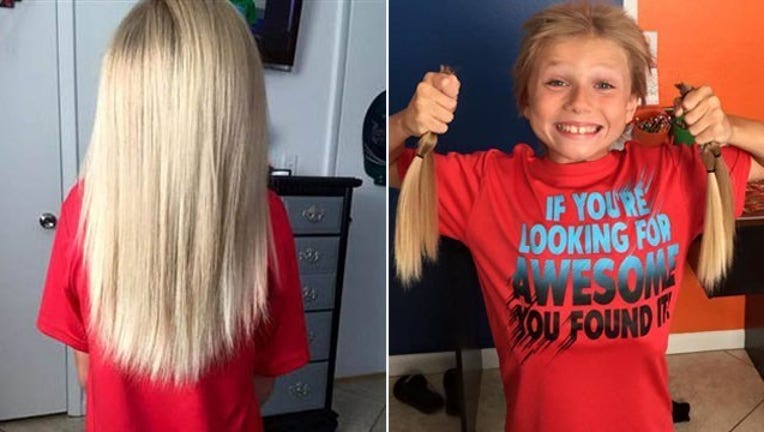 After reading the name, one can guess Christian is a boy, but up until May 20, looking at him was a different story.

That's because two years before that, Christian vowed to grow his hair long enough to donate four full ponytails to sick children who had lost theirs.

In a post on Facebook, his mother, Deeanna Thomas, says Christian got the idea from a St. Jude Children's Research Hospital ad.

And after seeing the commercial, Christian told her he "wanted to give a wig away, and help another child", so that's just what he did.

As he got closer and closer to his goal, he got more and more attention from people in his hometown of Melbourne, Fla.

Some people who didn't know better mistook Christian for a girl.

"I have been told I have beautiful ‘daughters'," said Thomas. "He was called a girl at summer camps and playgrounds throughout the years."

And others even tried to persuade him to cut it early.

"Coaches and family friends [told] him he should cut it, or [offered] him money to cut it," Thomas' post continued.

But Christian stuck to his guns and kept those long locks until he finally met his goal.

May 20th was a big day for Christian, and a proud one for his family. He finally had enough hair to donate, and so the snipping ensued.

It wasn't long before his story received national attention, but according to Christian's mom, it was the wrong story.

"I just have to say that while yes, he did receive some bullying and was called a girl ALOT while we were out, that is not what his story was supposed to be about!," Thomas said in a follow up post on Facebook. "It is supposed to be about what he did and the kindness and love for others that children have."

In the end, Christian decided to donate his hair to "Children with Hair Loss", and it's safe to say the "kindness and love" behind the gesture was what really stood out.

"No matter how it gets worded," Thomas concluded, "my son is amazing; he is a strong willed individual, and I am so proud to be his mama!"